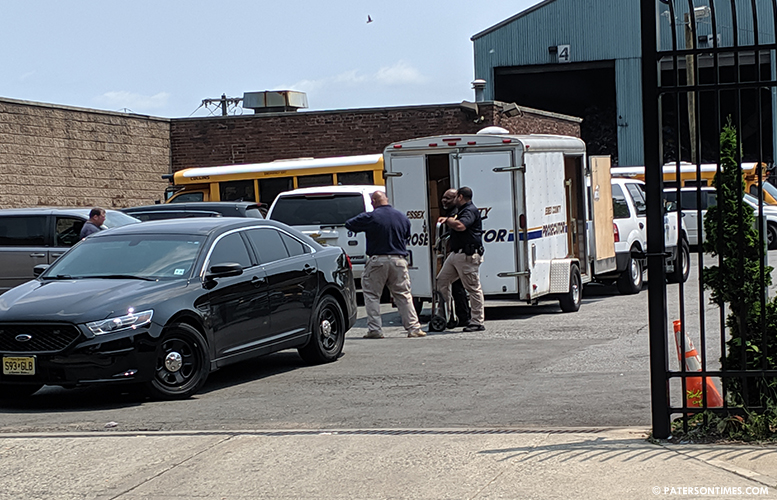 Detectives were seen carting away evidence from the company’s building on Paterson Street. Khalique’s brother, Shelim Khalique, owns the company.

Neither Khalique brothers responded to calls for comment on Friday afternoon.

The prosecutor’s office conducted safety inspections of buses owned and operated by the company, said acting Essex County prosecutor Theodore Stephens, as part of an ongoing investigation into school bus safety in Newark.

Eight bus drivers, more than half of those detained, did not have proper credentials to drive school children. Two bus drivers and a bus aid had open warrants and were taken into custody, according to Stephens.

Authorities executed search warrants at the A-1 Elegant Tours business offices in Paterson. Some of the employees came to pick up their paychecks on Friday morning and were met by police officers.

“We don’t know where the owner is,” said Stanley Brooks, an employee at A-1 Elegant Tours. “I just want my money.”

Brooks said he had been working for the company for a year.

A dozen employees were at the location on Friday afternoon. They did not know why the company’s offices were raided.

Khalique’s company received millions of dollars in busing contracts from the Paterson school district. But last year, the school district banned the firm for two years from bidding on bus contracts due to large number of violations.

A-1 Elegant Tours has contracts in other New Jersey school districts. In Sept. 2018, a driver for A1 Elegant Tours was charged with child endangerment after allegedly hitting five cars, two traffic poles, and a fire hydrant in Orange and East Orange with a nine-year-old child and a woman aide on board the school bus.

“They do look out for people that don’t have a job. As far as something illegal or legal going on, I don’t know nothing about that. I just want my bread that’s it,” said Brooks.

When asked if he tried to call the owner or the managers, he replied, “There’s nobody to call.” He said some employees had been arrested by police.

Brooks said he picked up his paycheck in the morning. But he couldn’t cash it.

“The owner went in and closed the account and took the money out of the account,” said Brooks. “I want the owner to know, ‘You won’t be getting back that van until I get my money.’”