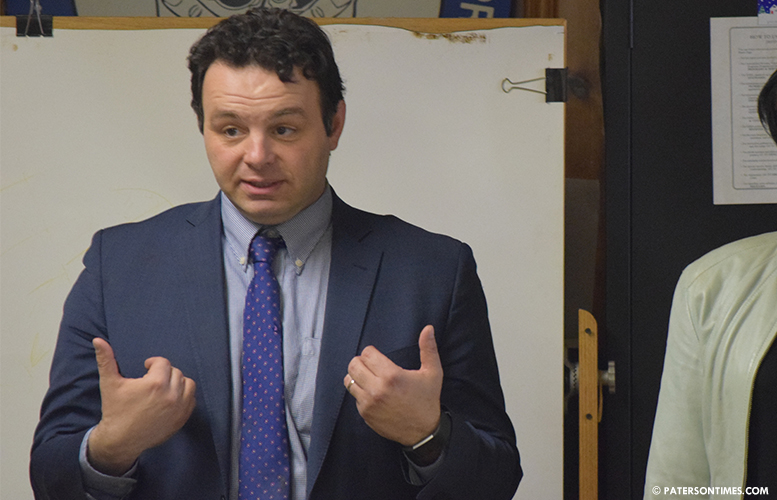 Sayegh had promised to correct the problem in February, but that hasn’t happened.

Shabazz has not consistently used the biometric system since being appointed in Jul. 2018, according to records. Her handwritten time records from January to May show she reports to work at 9 a.m. on most days. However, a four-day period when she did use TimeTrak, Jan. 14th through 17th, only week in 11 months of the Sayegh administration, she is shown reporting to work after 12 p.m. in three of the four days.

Work day starts at 8:30 a.m. for government employees in Paterson.

Ralph-Rawls has yet to consistently use TimeTrak. For example, from May 7-19, she used TimeTrak to clock-in and clock-out just twice.

Powell started using the TimeTrak system in January. Previously, he had bypassed the system, according to government records. He did not consistently use the system from Jan. to May, 2019. For example, there were days when he did not use the system. Many days, Powell clocked in, but never clocked out.

When reached for comment, Sayegh and his chief of staff Kathleen Long, sought an in-person meeting. On Thursday night, Long held a contentious off the record meeting on the second floor of City Hall. Neither Sayegh nor Long responded to a series of questions sent in advance via email.

Sayegh is paid $119,000 to govern the city. Long is paid $100,000 to assist him in running the municipal government. For months, many of Sayegh’s critics have said he is spending too much time on ribbon cuttings and press conferences and too little on governing.

Sayegh had campaigned on being a cheerleader and leaving day-to-day governing to his business administrator.

“We asked everyone in the administration to use TimeTrak,” said councilman Flavio Rivera, chairman of the finance and personnel committees. “Why is this administration allowing this to happen?”

“If the policy of the city states they need to use TimeTrak, they have to do it,” said councilman Luis Velez. “They cannot bypass the policy because what’s going to happen is everybody’s going to do whatever they want in the city.”

Rivera said some City Hall employees told him some of Sayegh’s top officials were not reporting to work. He noted that was in the early part of Sayegh’s 11-month tenure.

Municipal employees also complained department heads were reporting to work late and leaving early. Some employees provided photographs of empty parking spots assigned to Sayegh’s cabinet members that were from different times of the day.

McKoy seldom reports to work at 8:30 a.m., according to the records from Jan. to May. There were just six days in which the business administrator reported to work before 9 a.m. in that time span. Records show McKoy often stays late when he reports to work late. For example, on Jan. 24, he clocked in at 9:05 a.m. and clocked out at 7:20 p.m. The business administrator has a long commute from New Brunswick to Paterson.

Ralph-Rawls reported to work on time just four days between Jan. and May.

“Signing in a timesheet journal is appropriate in some circumstances,” said councilman William McKoy. However, it should not entirely replace the biometric time keeping system, he said. “We’ve paid handsomely for the TimeTrak system to record time. I think, all employees should be using that system to record their time and to be consistent. You may be working odd hours, but recording your in and out is still an important management tool. I’d encourage the mayor to require it.”