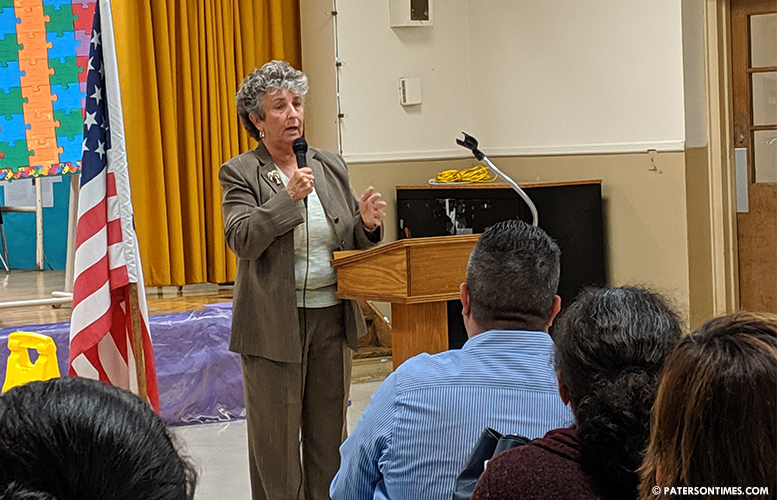 Shafer made the announcement at a meeting with parents at the Stars Academy cafetorium on Monday afternoon. She could not secure an outdoor play area and a bus drop off zone for the school at the proposed new location in downtown Paterson, she said, which forced her to discard the relocation plan.

Parents had raised concerns about lack of outdoor play area and traffic congestion at the old Silk City Academy building on Ellison Street. The district wanted to lease a nearby parking lot from Greenbaum Interiors, but the lot was for sale thwarting its plans.

“It threw us a curve ball,” said Shafer referring to the Greenbaum site being up for sale. She was ready to negotiate with Greenbaum for the outdoor play area and school bus drop off zone, she said. “I’m not negotiating with the new owner and I’m also not going to gamble with the children here at Stars Academy.”

Shafer said she and the board decided against the plan to relocate Stars Academy prompting the room filled with more than 100 people to erupt in applause.

“Finally, somebody at the board took a stand for the kids that can’t speak for themselves,” said Mark McCollum, whose son Isaiah is a second-year senior at the school. His son suffers from autism, he said. Most of the students at Stars Academy suffer from developmental disabilities, including autism, down syndrome, and epilepsy, according to parents. “I came here mad. I didn’t know the outcome. In my mind, I was saying to myself, who is going to take a stand for our children.”

Parents were told the relocation was a “done deal” by some district officials. But, a dozen of them refused to accept the decision and protested at the school board meeting last week. Some of them barely spoke English, but that did not hinder them from demanding the school district keep their children at the building on 14th Avenue.

“This building has been great for my child,” said Doris Barahanna, whose son attends the school. She said the move will have negatively affected the children, some of whom are sensitive to noise.

Francis Classen, whose son Kelvin Perez, a 12th grader, attends Stars Academy, was pleased with Shafer’s decision. She was among the more than dozen parents to protest last week. She said the students’ education would have been severely disrupted by the move.

“He has accomplished a lot,” said Classen speaking about her son.

“Stars Academy is a special place. Because of you parents, because of your children, because of the staff this really is a joyous place to come to everyday,” said Natalie Hackett, principal of Stars Academy. “I’m so grateful we’re staying.”