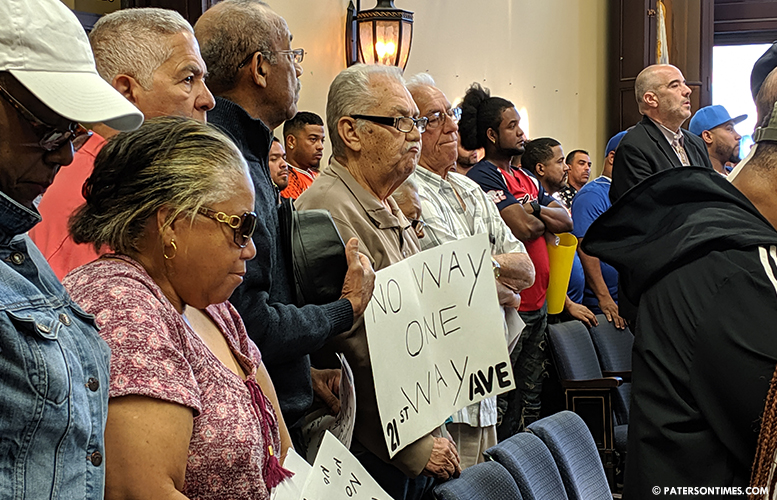 Municipal officials are moving ahead with a plan to turn 21st Avenue, a bustling commercial area with scarce parking, into a one-way street to create 60 angle parking spaces despite protests from senior citizens living at the Governor Paterson Towers on 20th Avenue.

Council members narrowly approved a pair of ordinances making the changes on Tuesday night. One measure turns 21st Avenue into a westbound one-way from Madison Avenue to Summer Street. Another allows for construction of angle parking spots at the same road segment.

Councilman Al Abdelaziz said his constituents complained to him about lack of parking in the area prompting him to approach the Paterson Parking Authority to conduct a study. He later held four community forums to reveal the plan to turn 21st Avenue into a one-way to allow for angle parking.

“I fight for my residents and they need relief,” said Abdelaziz on Tuesday night. His initiative was aggressively opposed by councilman Luis Velez.

Council members had delayed vote on the measures last month to allow for a community forum with residents of Governor Paterson Towers. However, that meeting never materialized.

Mayor Andre Sayegh supports the changes, according to council members.

“We’re scared to cross the avenue as it is,” said Bill Priestly, who said he represents the 980 residents of Governor Paterson Towers. “What’s going to protect us from all this traffic?”

Priestly was accompanied by more than 50 seniors from the towers. His group presented 518 signatures to oppose the measures.

Abdelaziz said the city will enhance pedestrian safety on 20th Avenue as part of the plan. He said it includes poles that pedestrians can press before crossing, speed humps, improved road markings, and better signage.

Velez said these measures, except for speed humps, could be taken without turning 21st Avenue into a one-way. He also said at a previous meeting it’s much more sensible to turn 20th Avenue into a one-way as well — similar to the complimentary one-ways of Park Avenue and Market Street.

“I think it’s a creative recommendation. I think it’s a bold initiative. It’s either going to work well or it’s going to be horrible,” said councilman William McKoy.

“It was not properly vetted,” said councilwoman Lilisa Mimms. She said the city is making the changes “without considering the voices of the people.”

The council approved both measures in a 5-4 vote. Abdelaziz, Michael Jackson, Shahin Khalique, Flavio Rivera, and Maritza Davila voted in favor while Velez, McKoy, Mimms, and Ruby Cotton voted against.

Senior citizens began to walk out of the meeting before Davila could cast her vote as it became clear the measures would pass.

“The city hasn’t changed in a long time. People are afraid to make changes in this city,” said Rivera. “If the recommendations from the professionals are wrong, we could always put it back the way it was. It’s not like we’re putting a building in middle of 21st Avenue.”