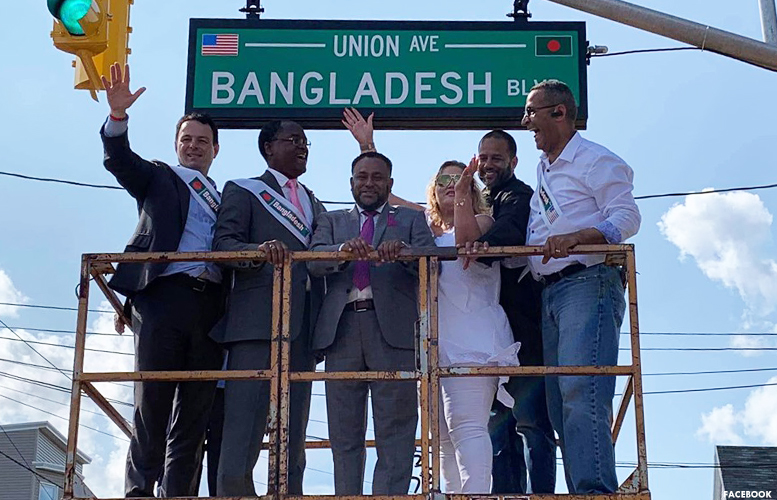 Bengalis filled the streets for the naming ceremony, festival, and a concert that followed into the night to mark the occasion.

“We feel very proud today.  This is a big achievement for the Bangladeshi community,” said Joyed Rohim, a member of the Paterson Board of Adjustment, who helped to organize the huge spectacle that attracted hundreds of people.

An estimated 15,000 Bengalis, mostly hailing from Bangladesh, call the Silk City home, according to community leaders. The number is 25,000 in Passaic County.

“We take pride in our heritage of being Bangladeshis in the United States,” said Nadia Hussain. Immigrants from Bangladesh began to appear in Paterson in the 1970s. “We are very much a part of the diverse and historical fabric of the city. The naming of this street commemorates and acknowledges this fact and illustrates how the Bangladeshi community’s roots in Paterson run deep and vibrant to this very day.”

The two-block section of Union Avenue from Sheridan to Wayne Avenue is dotted on both sides by Bengali-owned businesses. Bangladeshi-Americans own large number of homes in the Totowa and Hillcrest neighborhoods.

“You are a major part of the fabric of Paterson,” said mayor Andre Sayegh. “Bengalis are here to stay in Paterson.”

For decades, Bengalis have dominated academics in city and county schools. Sayegh pointed out both the valedictorian and the salutatorian at the Passaic County Technical Institute (PCTI) were Bangladeshi-Americans.

Over the past decade, Bengalis, who have higher voter turnout rates than other ethnic groups in the city, have become a big force in local politics. In 2012, the Bengalis elected their first Bangladesh-American councilman Mohammed Akhtaruzzaman in an upset election. Four years later, councilman Shahin Khalique ousted him, highlighting the tumulus politics within the close-knit ethnic group.

A large crowd gathered to watch the concert on Wayne Avenue between Union and Totowa avenues after the street naming.

Khalique viewed the street naming as a signature accomplishment of his three-year tenure on the City Council.

“I’m working very hard for our community,” said Khalique, rattling off a list of his accomplishments in office, to a throng of people from the concert stage after the street naming ceremony.

Khalique and the other organizers managed to bring out such a large crowd by having celebrities from Bangladesh, including the hugely popular rock band Miles, perform at the event.

Khalique may need the merry bunch next year for his re-election.

“Having reached out and helped many women that have recently came to Paterson from Bangladesh, I think this street naming is literally and symbolically providing a sense of belonging to these women and their families,” said Tania Chowdhury. “The transition process requires immigrants to navigate identities, roles, and linguistic and cultural differences. This is often stressful and isolating and so, being able to step out of the house and see your native country and community being recognized in this way, communicates that you are welcome and you are valued members of the broader Paterson community.”