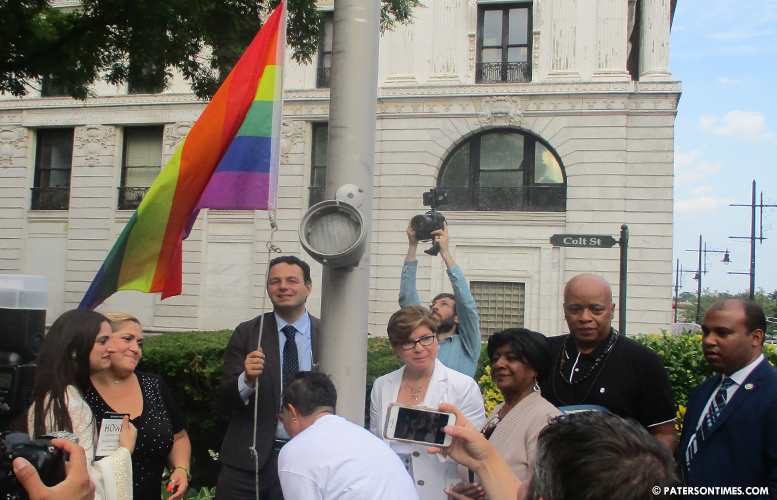 Mayor Andre Sayegh pulled the rope on the pulley to raise the gay pride flag which represents the lesbian, gay, bisexual and transgender community over the historic City Hall in downtown Paterson for the first time on Friday afternoon.

“June 28, 1969, marked the beginning of the gay rights movement,” Sayegh told the small crowd of fewer than three dozen people at the flag raising event referring to the Stonewall riots in New York City. “We take tremendous pride today in raising the flag 50 years later.”

Sayegh received warm applause from the group that attended the flag raising.

Elizabeth Estella Valverde, vice chairwoman for the Paterson Arts Council, who called for the flag raising at a City Council meeting earlier in the month, recited “The Weight of The World Is Love” by Allen Ginsberg for the occasion.

Some City Council members joined the mayor for the ceremony.

Council president Maritza Davila dedicated the event to her brother, who could not attend the flag raising.

“I am a Christian,” said Davila. “But there is a lot of judgmentalism in churches. I am thankful that my mother understood who my brother was.”

Her mother accepted the brother before she died, said Davila.

Davila said “God is a God of love.”

Davila was joined by some of her council colleagues, Al Abdelaziz and Ruby Cotton.

“We need to look at each other and respect each other,” said Curtis Farrow, president of the Eastside Neighborhood Association, calling the gathering a “no judgment zone.”

Farrow encouraged attendees to hug each other.

“When I heard about the flag raising, I decided to stop by after work and lend my support,” said Austin Greitz, 23, of Caldwell. He works in downtown Paterson.

Greitz said the gay community is “pretty accepted in New Jersey but that there are still issues.”

“I believe that people have a right to their own opinions,” said Greitz.  “Ultimately, they make their own decision. Some believe that marriage is between a man and a woman.  However, same-sex couples should have the same rights.”

Some of the city’s religious leaders were not clapping for the flag raising.

“I’m not in line with some of their practices but I do respect their right to live whatever lifestyle they choose,” said pastor Allen Boyer speaking of the LGBT community. “I’m a preacher of the gospel. I wouldn’t condone it but I wouldn’t condemn it. I learned long ago not to judge. I leave that up to the Lord. The world is going to do what it’s going to do. There are a lot of pastors who say that it is wrong. However, the legislative body has said it’s right and now it’s the law of the land. We are in the last days. Render unto Caesar that which is Caesar’s and to God that which is God’s.”

“I can’t speak for the mayor,” said pastor James Staton.  “I stand on the Bible. From the principles that govern our nation that’s part of the right to free speech in our constitution.  I neither condone it nor condemn it.”

“I disagree with it. I’m really really disappointed. This is not right,” said pastor Jesus Sevilla.

None of the pastors attended the flag raising. 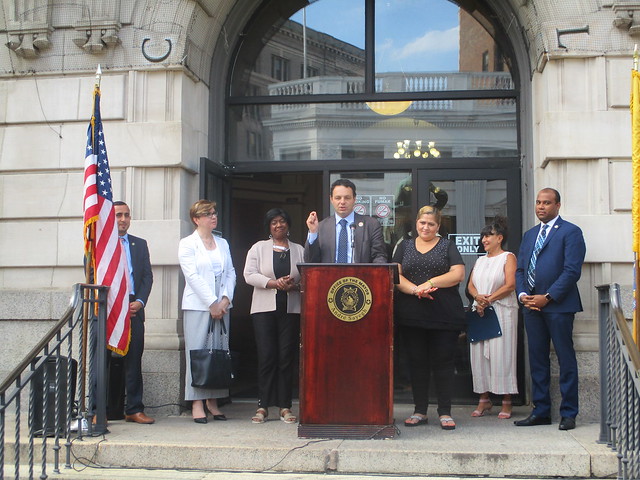 Correction: A previous version of this report erroneously stated Davila’s brother had passed away. This error was corrected at 12:30 p.m.