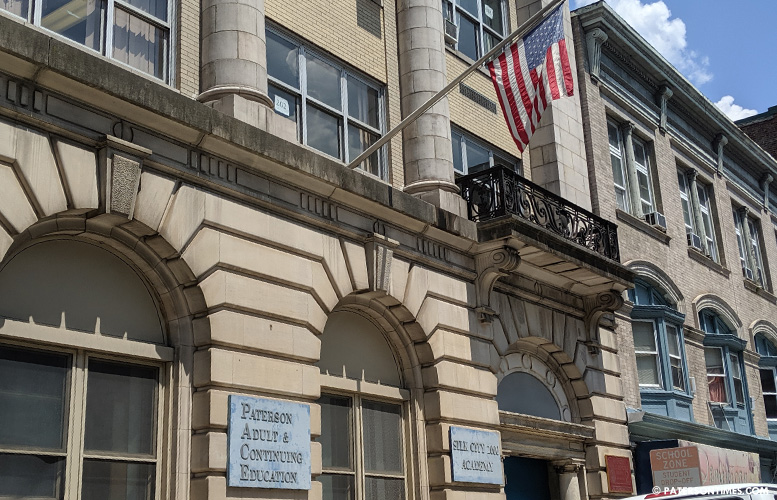 The city’s school district is planning to open a new center at the Silk City Academy building in downtown Paterson to house students given out-of-school suspension for serious offenses.

“What I’m trying to do is get them more education than an hour a day and provide them with some counseling and restorative justice because if I send you home for ten days, you watch TV, sleep, and get into more trouble, ” said superintendent Eileen Shafer.

After five days of suspension a student gets an hour of home instruction, said the superintendent.

Students will have a half-day schedule at the program. They will be dismissed at 1 p.m. Staff will remain until 3:10 p.m., said Cozart.

Cozart did not have a price tag for the school. He said the new program does not create new expenses for the district.

Cozart suggested the program will keep students from falling behind in class, but that argument was quickly dismissed by school board members.

“How do you handle the academic portion of it? You have kids from elementary and high school,” said Hodges. He also pointed out two teachers cannot instruct students in all the subjects.

Teachers will continue to give assignments to suspended students via the online student portal. Student will be able to access the assignments on their Chromebook, said Cozart. He said the two groups, middle and high school students, will be kept in separate groups and will not interact at the school.

“They are being given work,” added school board president Oshin Castillo.

“How do they do the work?” said Hodges. “The instruction time will not be there.”

Shafer refocused the argument to about finding out the cause of the incident that led to the student’s suspension. She said the program will also teach students coping skills and equip them with skills to better avoid taking actions that lead to disciplinary actions.

Shafer said busing will be provided from the student’s home school to the center on an as needed basis. She said the district has received its two buses and can use them to transport students to the program.

Schools issued 3,000 instances of out-of-school suspension in the 2016-17 school year, according to Cozart’s data presented to the school board. The figure includes students suspended multiple times, something that he hopes will diminish once the new program is put in place.

Cozart said some of the staff that will be assigned at the center received training in restorative justice via the Paterson Education Fund to better address conflict in school.

This is not the first time the district has created such a program. Cozart said in the 1990s, the district had a program called “Zone” that was housed at a building on Union Avenue. School officials said the program ended due to it being overwhelmed and district financial problems.

School board member Emanuel Capers worried the program could turn into a dumping ground for students with behavioral problems.

Cozart said a serious incident report has to support out-of-school suspension for a student. He sees that as protection against principals assigning their troublesome students to the center.