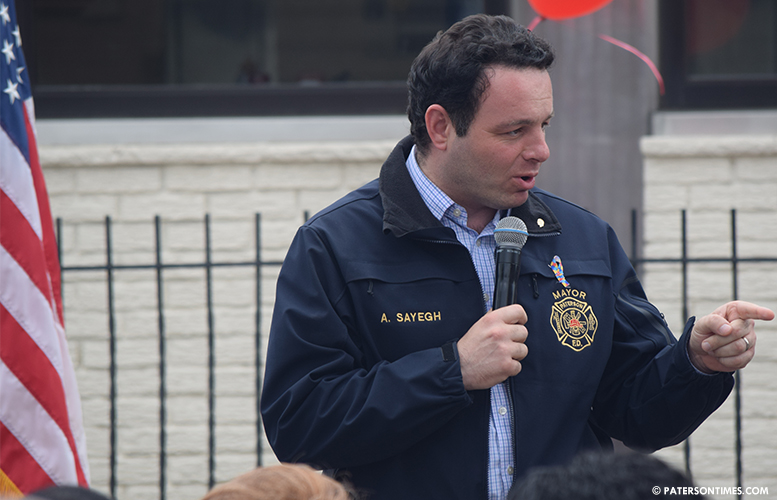 Mayor Andre Sayegh’s controversial One Paterson group, which has raised hundreds of thousands of dollars in 13 months, will not disclose its donors.

Decision not to disclose identities of people who gave to the group was made by its board of directors, lobbyist William Pascrell, III, president of One Paterson, told people at the mayor’s ball fundraiser at the Art Factory last week.

“The board unanimously voted,” said Pascrell, son of congressman Bill Pascrell, on Friday. The board is made up of the mayor’s friends and allies. He said donors were nervous about public disclosure. “They just don’t want to be made public.”

Sayegh described the board as “independent.” He said he did not sell a single ticket for the Jul. 31 fundraiser. He also dismissed the suggestion that he had enormous influence over the board members.

“It’s an independent organization,” said Sayegh. “The board rendered the decision.”

Sayegh said sometimes disclosure negatively affects donors. For example, someone who gave money to the group could get inundated with requests to donate from other people or groups, he said.

Sayegh created the organization after coming into office last year. His campaign slogan had been “One Paterson” which, at the last mayoral race, represented bringing together the city’s disparate ethnic communities.

The organization’s refusal to disclose donors has invited criticism over the past year.

“I’m not disappointed. It was expected. That’s the game,” said former mayoral candidate Pedro Rodriguez. “That’s why you don’t see progress in cities like Paterson because of corruption.”

Rodriguez finished third place in last year’s election. He spent considerable amount of time criticizing the mayor for his ties to special interest groups during the campaign.

Rodriguez alleged the organization is a “workaround” to skirt existing pay-to-play laws. Without disclosure, the public has no way of knowing whether any of the donors are receiving business from the municipal government.

“It’s a shame,” said former councilman Alex Mendez, who finished second place in last year’s mayoral race. “The community needs to know whether those people are getting contracts or favors from the administration.”

Mendez said the mayor is hiding something.

“If they have nothing to hide, they should have no problems releasing the donors,” said Mendez. “If they refuse to do that, they are hiding something.”

Mendez publicly called on the mayor to release names of donors in June.

Under federal law, the nonprofit does not have to disclose its donors. “We plan on following the law,” said Pascrell.

Both Pascrell and Sayegh repeatedly said the main purpose of One Paterson is to promote the Silk City.

Pascrell said the group will fund a big marketing campaign in the fall to promote the city throughout New Jersey and the United States.

“This is a good thing for Paterson,” said Pascrell.

Sayegh said the group will support his U.S. Census effort to get all residents counted, promote literacy in the schools, and assist other organizations in the city. At the fundraiser last Wednesday, Pascrell told the audience the group will help to ferry a donated fire department ambulance to the Dominican Republic for councilman Flavio Rivera.

The fundraiser was attended by 500 people, said Pascrell.

“Our mission is to promote Paterson,” said Sayegh. “We’re going to market the city.”