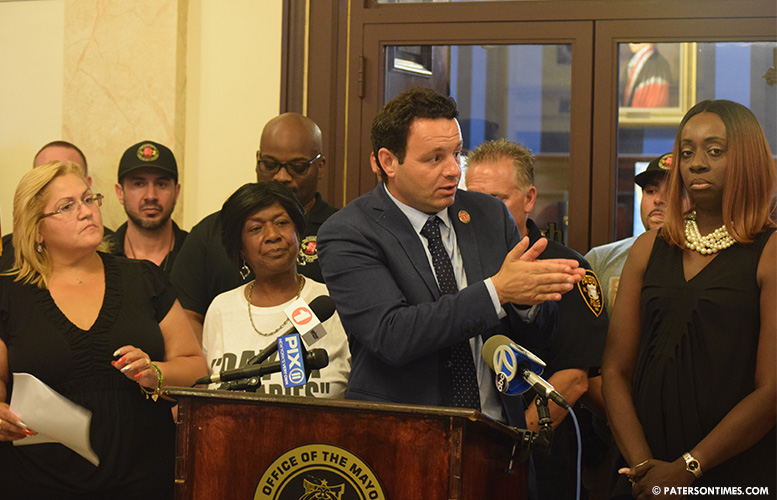 Police will deploy more patrol units on the streets, said public safety director Jerry Speziale. He said police will use data to increase presence in areas where there have been recent flare-ups.

Police have long said one-percent of residents are responsible for much of the gun violence in the city. Police have identified many of those in the one-percent, said Murray. Two years ago, police tried to connect them to job training and other social services to let them leave crime behind.

Speziale said police will also break up street corner gatherings. He said targeted patrols will be conducted seven days a week. Cost for the stepped-up patrols will be under $10,000 a week, he said, because the patrol force is made up of mostly new officers, who command a lower pay rate than old timers.

The director wants to have targeted patrols for the remainder of the summer.

“You’ll see more visibility in areas where we have seen violence,” said Sayegh at the press conference at City Hall.

“This is serious and we take it seriously,” said council president Maritza Davila. Two men were killed in a series of shootings that began on Saturday.

Two men — 20 and 18 – were hit by gunfire on North Main and Clinton Street on Saturday night. On Sunday night, 28-year-old Kevin Lewis was shot and killed at 271 Summer Street.

On Monday night, 30-year-old Dashon Mayfield visited a makeshift memorial for Lewis on 12th Avenue and East 22nd Street. Mayfield was shot and killed at the site. A second man was wounded, but is expected to survive.

Lewis had been released from the South Woods State Prison in Jun. 2016 after serving a seven-year sentence for aggravated assault and unlawful possession of a handgun, according to state records. The conviction stemmed from his role in a shooting that claimed the life of 17-year-old Da’Shad Spencer of Garfield in 2009.

The mayor began his press conference with a moment of silence and giving his condolences to the families of both men.

Sayegh recognized more policing will not remove the scourge of gun violence. He urged local groups, including the Ceasefire community group, to aide police in curbing gun violence.

“I’m begging every person out there, if you see something say something,” said councilwoman Lilisa Mimms. “If you know something, say something. The police cannot do it by themselves.”