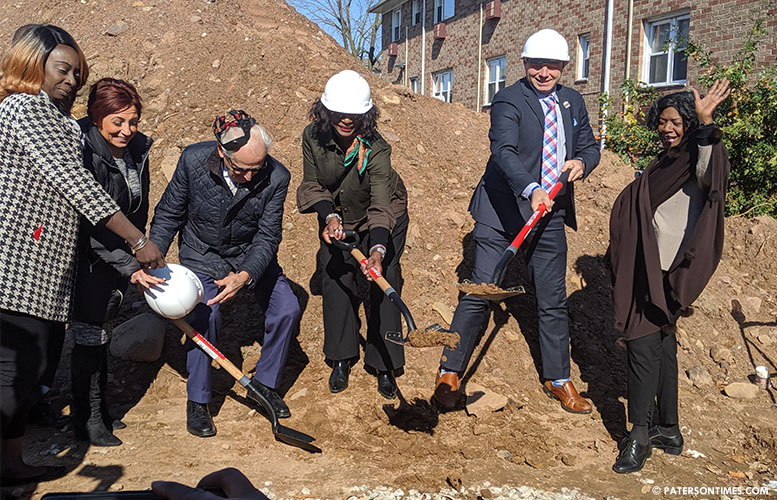 A new preschool, designed to educate 130 students, ages 3 and 4, is opening on Crooks Avenue next fall.

Mayor Andre Sayegh and others broke ground on Wednesday morning on the $5 million three-story building being built at 315-321 Crooks Avenue.

Gilmore Memorial Preschool will operate the school. It will have nine classes of 15 children, said Brenda McKoy, a family worker. She is not related to councilman William McKoy.

“There is a high demand for preschool in Paterson,” said Sayegh.

Brenda Belmont, executive director for the Gilmore Memorial Preschool, said she hopes to meet that demand in the 6th Ward. She has a pre-school on East 22nd Street that educates 108 children and another on Montclair Avenue for 80 students.

“It’s about our children and serving them,” said Belmont. She said many of the neighbors reached out to her to open a second site in the 6th Ward.

Belmont’s firm will lease space at the building from Zack Barkawi, who is putting up the building. He had a crew working at the site on Wednesday morning.

Barkawi said the building will be finished before September 2020.

“There is no better way to make a community a better place than by starting the education of our very youngest, three and four-year olds,” said deputy school superintendent Susana Peron.

The school district has a longstanding partnership with the Gilmore Memorial Preschool, said Belmont.

“I know the demographics here. Parents would stay home. Now, we’re giving them an option,” said Sayegh. He said parents can now go to work and ensure their children are getting a “high-quality education at a proven preschool.”

Sayegh spoke from personal experience, he said. His daughter enrolled at the Gilmore Memorial Preschool II on Montclair Avenue after it opened.

“The schools for our little kids are very important and critical for a good foundation,” said Rep. Bill Pascrell, a former teacher.