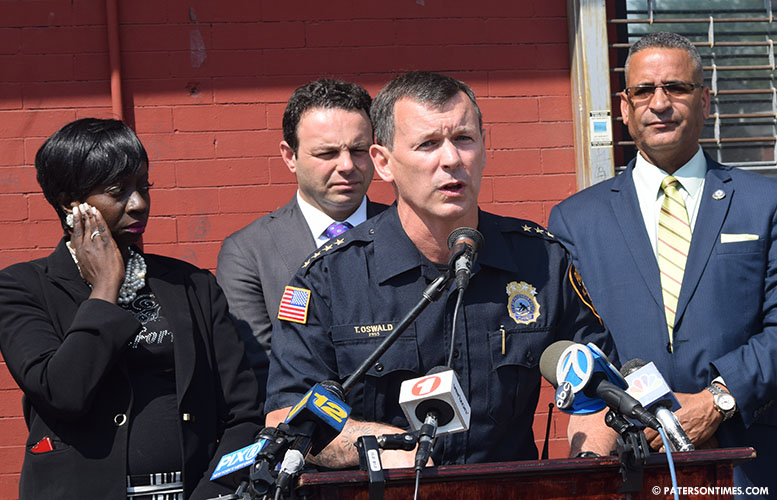 Mayor Andre Sayegh succeeded in forcing the retirement of popular police chief Troy Oswald through a settlement agreement approved by the City Council on Thursday night.

Under the agreement, Oswald has to file his retirement papers in the next seven days. His salary increases by $45,000 from current $210,000 to $255,000 retroactive to Jan. 2018. He will also receive an unspecified amount by cashing in leave time under the deputy chiefs’ contract, said officials.

Oswald will remain as police chief until the state pension board approves his retirement which is likely to take couple of months.

“I cannot with clear conscience sit still and watch this take place,” said Michael Jackson, 1st Ward councilman, chairman of the public safety committee, who vehemently opposed the settlement deal. “The absolute worst decision is being made.”

Sayegh and Oswald were allies until a falling out late last year. The chief’s lawsuit states, the mayor reneged on a promise to raise his salary after he highlighted poor working conditions at the Frank X. Graves Public Safety Complex.

Both Long and McKoy held a meeting with the chief on Oct. 24, 2018. McKoy abruptly ended the meeting and told the chief there was no money in the budget for his increase, according to the lawsuit.

“I don’t think this is the right thing for the city of Paterson,” said council president Maritza Davila after the vote.

Others argued it is the best course given the intractable dispute between the chief and the mayor.

“I believe this is the best course of action,” said William McKoy, 3rd Ward councilman.

“I had to do what’s best for the city and best for our chief,” said Al Abdelaziz, 6th Ward councilman, after the vote. “I know he does a great job for our city.”

An ally of the mayor, Abdelaziz acknowledged “poor choices were made” by the administration.

Abdelaziz said the settlement “stops the bleeding” from continuing litigation. So far, the lawsuit cost the public approximately $15,000, according to officials.

“We’re going to lose more money by this settlement. We have to bring another person up to that salary level and then that person will retire,” added Jackson.

“This is such an unfortunate situation,” said Lilisa Mimms, councilwoman at-large. “When there are disagreements and differences, we have to learn to handle them in an adult-like fashion.”

Several council members accused Sayegh and his administration of being childish.

Oswald is credited with the arrest of seven rogue police officers for violating residents’ civil rights. In 2018, his first year on the job, murder rate dropped 50-percent. However, he has received some criticism as killings and shootings spiked in 2019.

“He’s the best we’ve seen,” said Velez during the vote.

“There should be no commentary regarding the settlement,” interjected acting law director Farah Irving.

Velez cast the deciding vote on the settlement.

Velez said he voted in favor of the agreement to ensure the chief isn’t left in a state of “limbo” without a contract. He made a last-ditch effort to bring both the chief and the mayor together on Thursday, but Sayegh obstinately refused to consider extending a contract to Oswald.

Sayegh hasn’t indicated who will succeed Oswald. Some have suggested the mayor is looking at deputy police chief Ibrahim “Mike” Baycora.