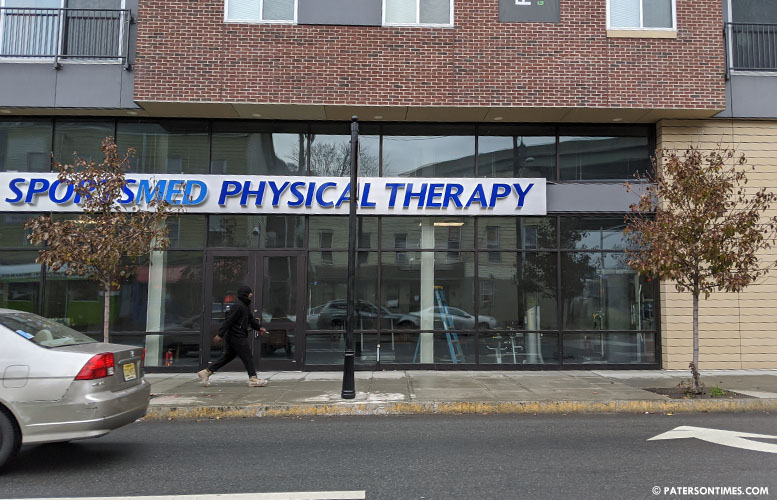 A ground-floor retail space at a key entrance to Paterson that has been vacant for two years will house a physical therapy outlet.

SportsMed Physical Therapy is expected to open on the bottom floor of the Park Corner Plaza in the corner of Grand and Spruce Street in January, said Bob Guarasci, head of the New Jersey Community Development Corporation (NJCDC) which owns the mixed-use building.

“They are putting the finishing touches on it. It will be open for business soon,” said Guarasci. He said a number of potential tenants expressed interest in the space, but he waited for the right tenant. “It takes time to negotiate the right terms.”

7-Eleven sought to open a location, but wanted parking in the front. A dollar store wanted to open, but Guarasci did not think it was appropriate for the space.

Guarasci said the space being occupied by SportsMed Physical Therapy is 2,800 square feet. He said the space is being rented for $15-16 a square foot. The company has a 10-year lease on the space, he said.

SportsMed Physical Therapy has 13 other locations in New Jersey, according to its website.

Guarasci is responsible for transforming the corner two years ago. Park Corner Plaza, a $4.2 million mixed-use development, opened in Nov. 2017. It has 11 apartments in the upper floors and retail on the bottom.

Apartments were fully occupied on the day of grand opening two years ago.

Guarasci is glad to have filled the vacancy and is happy to have SportsMed Physical Therapy at the Park Corner Plaza.