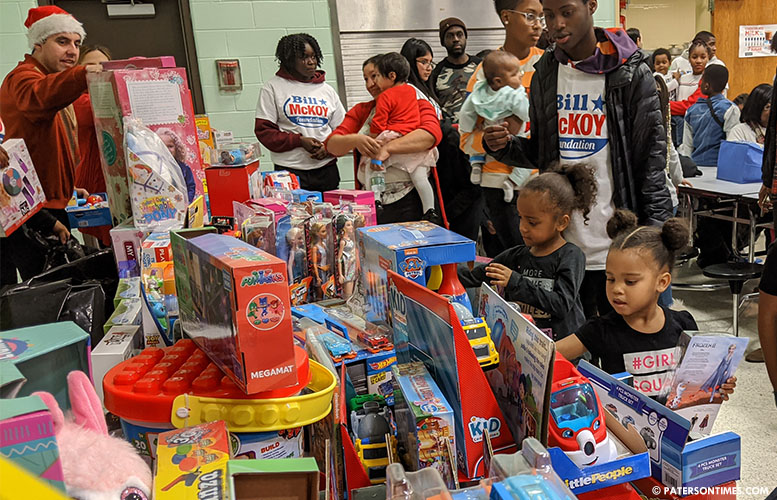 Six-year-old Mikael Howard skipped to the front of the auditorium at the Martin Luther King, Jr. Elementary School to retrieve his bicycle on Monday afternoon.

Howard was handed a yellow and black Huffy bicycle by councilman William McKoy. He climbed on the bike, posed for a picture with the councilman, and skipped back to his seat.

“I’m so happy he got it,” said Howard’s mother Joann Milton. Her son was one of a number of youngsters whose tickets were picked out of a box to receive some of the more premium toys given out by the nonprofit Bill McKoy Foundation.

Howard said he planned to ride the bike up and down his block. Except, he has a problem: he has yet to learn how to ride a bicycle, said his mother.

“My brother will help me learn,” added Howard. He said he plans to ride his brand-new bicycle up and down the blocks in his neighborhood.

Howard was one of hundreds of young people to receive presents for Christmas through the McKoy Foundation.

“Every child gets a gift,” said McKoy, standing on the stage in front of a packed auditorium, before starting his toy giveaway.

McKoy had game consoles, tablets, and bicycles for distribution. Before the raffle, the councilman had every child pick out a present – toys, board games, and numerous other items – to ensure every youngster left with a gift.

McKoy’s family members and a band of volunteers collected and purchased thousands of toys to distribute to young people. His nonprofit has been giving out toys to the city’s young people ahead of Christmas for 16 years.

“I think they are amazing,” said Gladys Santiago. Her son, 4-year-old Davon Chitty, won a bicycle.

Santiago said she wasn’t expecting her son’s number to be called. She said her son knows how to ride a bicycle.

Chitty, through his mother, said he plans to ride his bicycle in the vicinity of School 4.

Bicycles are a key feature of the councilman’s annual toy giveaway. He has explained, when he was a child, growing up poor in Jamaica, he always wanted a red bicycle. Santa Claus never brought him a pair of wheels. Now, McKoy brings bicycles to dozens of youngsters every year.