Councilman Shahin Khalique was arrested for driving while intoxicated on Don Bosco Avenue in 2010, according to New Jersey State Police and Paterson Municipal Court documents.

Khalique was driving a black 2000 Lincoln Continental on Feb. 4, 2010 at about 12:13 a.m. when state troopers pulled him over on Don Bosco and Totowa Avenue in Paterson, according to public records.

A state trooper ordered Khalique out of the vehicle to conduct a sobriety test which yielded a positive result, according to New Jersey State Police records.

Records show Khalique was taken to the New Jersey State Police Barracks in Totowa for processing. He was charged and released. Khalique appeared before the Paterson Municipal Court on Jul. 1, 2010 to plead guilty to the charge of driving while intoxicated (DWI).

Khalique paid a $1,091 penalty. His license was revoked for three months, according to Paterson Municipal Court records. 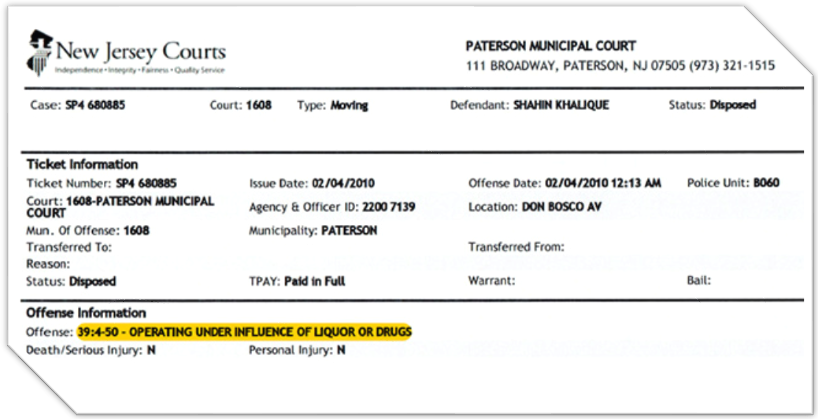 Khalique did not respond to a call for comment on Thursday morning.

Khalique is facing re-election in May. Two challengers – Frank Filippelli and former councilman Mohammed Akhtaruzzaman – have picked up petitions for the race.

“It’s nothing new. I know he drinks. He does all sorts of crazy things. It’s second nature to him. Maybe he’s a little bit more careful now,” said Akhtaruzzaman.

Akhtaruzzaman suggested the news of Khalique’s DWI arrest is likely to shock the city’s Bengali-American community that both men count on for support.

“In our community, because we’re Muslims, we can’t drink. It’s a very conservative community. Does this matter? Of course. It’s morally wrong. You can’t be duping the public like this,” said Akhtaruzzaman. “He portrays himself and his family as very religious. But I knew from day one, he was duping people. A lot of young people look at us as role models. Is this what you are giving back to the young generation?”