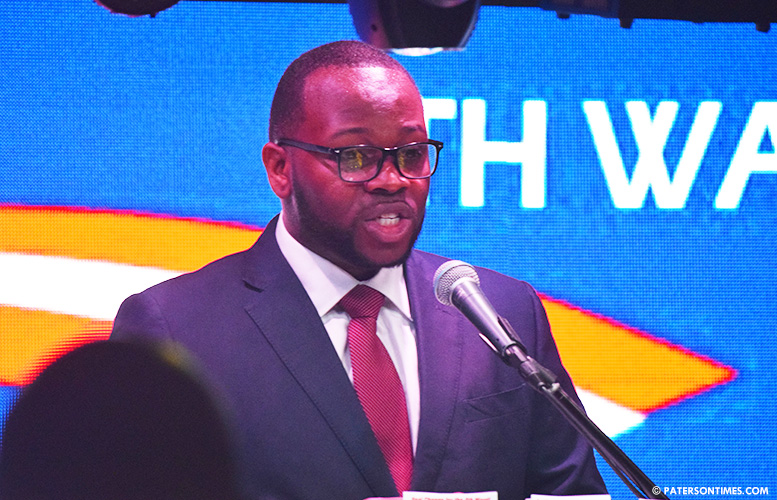 Justin Rucker kicked off his campaign to challenge two-term incumbent Ruby Cotton for the 4th Ward seat on Wednesday night.

“People are looking for a change in the 4th Ward,” said Rucker, 32, in his three-minute speech to approximately 65 people at the Bonfire Restaurant. “We’re going to, together, bring a positive, new change to the 4th Ward.”

Rucker said he envisages a police substation on the corner of Governor Street and Rosa Parks Boulevard to combat crime. The 4th Ward is mostly known violence, gangs, and drugs. He said he will also support affordable housing and mixed-use developments in the 4th Ward.

Rucker said Cotton has not been effective as a council person for eight years. He said she has done “nothing noteworthy” to further good governance. When asked if he thought Cotton is holding mayor Andre Sayegh’s administration accountable, Rucker said, “absolutely not.”

Cotton did not respond to a call for comment on Thursday morning.

“I won’t be a rubber stamp,” said Rucker. He said he also has no plans to be an obstructionist or a perennial critic of the mayor like his uncle, political activist Ernest Rucker.

Rucker is likely to face an uphill battle against Cotton, according to political observers. Cotton’s family, including her husband former councilman Ed Cotton, are well-known in the 4th Ward. Both sides have exchanged attacks over the past month.

Some of Cotton’s supporters have accused Rucker of being controlled by prominent developer Charles Florio.

Rucker has been working as a leasing manager for Florio’s company for about nine months. Florio said he employs 300 Patersonians, including Rucker. Cotton’s son previously worked for Florio for two years. Florio said he does not control or exercise influence over Rucker.

“Did I donate to his campaign? Of course, I did,” said Florio on Thursday morning. He said he donates to the campaigns of various candidates. “I’m not endorsing anybody. I’m sitting out of it.”

The Rucker and the Cotton teams clashed at a City Council meeting last month.

Rucker at the meeting said Cotton’s people were spreading falsehoods that he is “owned by Florio.” He told the Cotton team to cease using “dirty tricks” and focus on policy and issues affecting the 4th Ward.

“He has no idea or clue what this involves,” said Cotton’s husband at the meeting speaking of Rucker. He said Rucker was involved in stunts like the trailer that caught on fire on River Street. He accused Rucker of not knowing the boundaries of the 4th Ward.  The section of River Street where the abandoned trailer caught on fire is in the 1st Ward, he said.

Rucker on Wednesday night said he knew that section was in the 1st Ward. He said he couldn’t overlook an issue just because it’s outside the 4th Ward.

Strangely, following the exchange of attacks, both Rucker and Cotton’s husband called for a clean campaign.

“He is quiet; he is reserved; but he knows how to hit hard when it’s time to hit hard,” said former council candidate Bernard Jones, who introduced Rucker at the kickoff event.

Rucker said he intends to run a vigorous campaign. Cotton faced an easy opponent four years ago in Della Fischer, who now works the mayor’s chief of staff. Fischer had been reluctant to confront Cotton on her record. Rucker said he aims to shine a spotlight on Cotton’s record over the past eight years.

Rucker graduated from Harp Academy. He attended Passaic County Community College for a nursing degree. He also served in the Army National Guard for four years, he said.

Cotton is a close ally of mayor Andre Sayegh. Her husband is an aide to the mayor. Sayegh is aiming to re-shape the City Council by backing various candidates in the May elections. Past mayors — Martin G. Barnes and Jose “Joey” Torres – attempted to reshape the City Council in their favor with limited results.

Mayors are often unpopular mid-way into their term. Sayegh is no exception. He has faced protests over raising sewer fees. He has also raised property taxes twice.