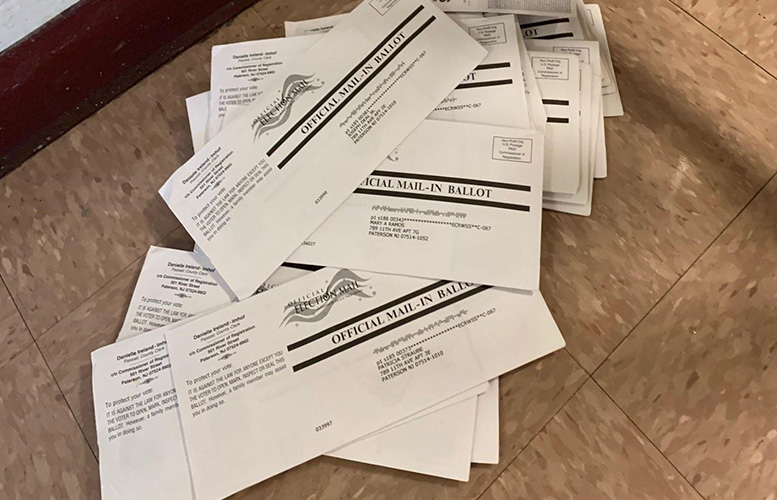 Stacks of vote-by-mail ballots have been left at Paterson apartment buildings raising concerns about people potentially being disenfranchised in the May municipal elections.

Mail-in ballots on the floor at the Park East Terrace Apartments.

“People are complaining of not getting them in the 3rd Ward,” said Sharrieff Bugg speaking of ballots. He is running in the 3rd Ward race. “It’s really frustrating.”

Bugg said some of his supporters at Kent Village have told him they have not received their ballots.

“Given the importance of the election, I think it’s a really unfortunate situation,” said incumbent councilman William McKoy. He recently had an encounter with a provisional U.S. Postal Service mailman who was making basic mistakes on his first day on the job.

In some cases, the mail-in ballots may have been addressed to people who do not reside at the buildings.

Three mail-in ballots on the ground in the Park East Terrace complex.

“There’s a stack of ballots sitting on top of the mailbox because these are people that have moved away,” said retired firefighter Luis Vega, who lives at the Kent Village complex.

Vega suggested the mail delivery person should take the ballots back rather than leaving them on top of boxes or on the floor.

“We asked the Office of Inspector General (OIG) to conduct an investigation regarding potential issues with ballots in Paterson, New Jersey. The Postal Service will respond to the OIG findings once the investigation is concluded,” said George Flood, a spokesman for the U.S. Postal Service – Northeast Area, after the Paterson Times forwarded images of mail-in ballots scattered on the ground.

Bugg said it isn’t just a 3rd Ward issue. He said his campaign manager, who lives in the 4th Ward, has yet to receive a ballot.

Mail-in ballots left on top of mailboxes at Kent Village.

Registered voters should have received their vote-by-mail ballots by May 1.

What to do if you haven’t received your ballot

Passaic County clerk Danielle Ireland-Imhof said a voter who has not received her ballot should contact the Elections Division at (973) 881-4127.

Bugg said some people have been calling the Elections Division, but it’s been difficult to get through.

Ireland-Imhof said if a voter does not get connected to an elections employee that means the staff is assisting another voter on the line. She said callers should leave a voicemail with their name and phone number so that a staff member could promptly return their call to help them.

“Given the complexities of an all vote-by-mail election, we are taking all the necessary steps to ensure voters have a fair and safe opportunity to cast their vote in the May 12, 2020 elections,” said Ireland-Imhof.

Governor Phil Murphy ordered the May 12 elections to be solely conducted through vote-by-mail ballots because of the coronavirus pandemic.

Vega, the resident of Kent Village, said he is not a fan of vote-by-mail ballots.

“It doesn’t work. You know the history of Paterson and how elections go,” said Vega. Indeed, the past decade in Paterson has been marked by candidates and their campaigns engaging in voter fraud using mail-in ballots to secure an advantage.

In 2010, 14 people, including ex-councilman Rigo Rodriguez, were arrested for voter fraud involving mail-in ballots. Rodriguez and his wife were allowed to enter into a pre-trial intervention (PTI) program to avoid prison time. Both agreed to a lifetime ban on public office and employment.

More recently, in 2017, a Passaic County judge had to invalidate 22 fraudulent mail-in votes in the 2016 2nd Ward election.

Vega pointed out another issue with vote-by-mail elections. His deceased father was mailed a ballot, he said.

“My father has been dead for six years. That’s a problem,” said Vega.

Correction: A previous version of this report confused photographs of Kent Village and Park East Terrace. The story has been revised to fix the confusion.