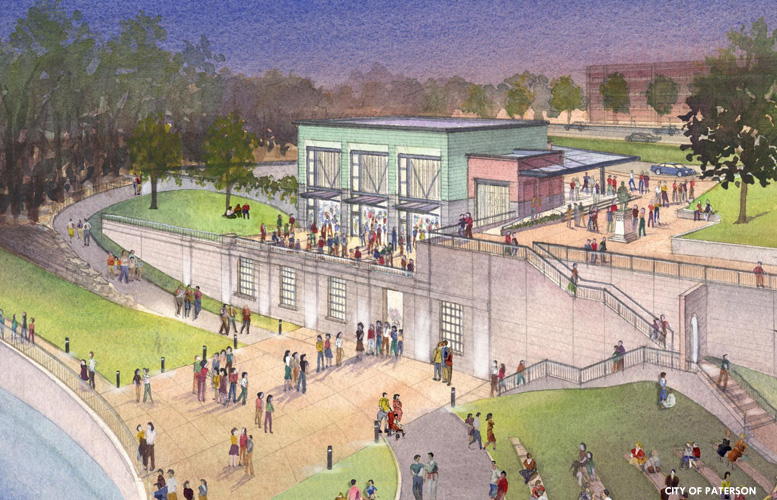 Mayor Andre Sayegh’s administration is guaranteeing $38 million bond for the New Brunswick Development Corporation (DevCo) for a visitor center, a community center, and a parking deck at or near the Great Falls.

Municipal officials said the city needs to guarantee the principal and interest payments on the $38 million debt that will be issued by the Passaic County Improvement Authority to monetize the state tax credits being used to fund the three projects.

“In other words, you’d like our city, us, to co-sign the bond for the developers?” asked councilman Shahin Khalique.

Sayegh has earmarked $37 million of the city’s $130 million state tax credits for the projects. The Hamilton Partnership for Paterson, which is behind the visitor center, has raised $9 million for its project while the New Jersey Community Development Corporation (NJCDC) has raised $3 million for its community center, according to municipal records.

Backing the loan for the developer does not present a great deal of risk for the city, said Timothy Cunningham of Archer Law.

Cunningham is the city’s bond counsel. Part of the funding for the parking deck includes a $4.2 million piece that has to be generated through parking revenue that will be paid over a 30-year period. In the worst-case scenario, officials said, the city will have to cover debt payments for that portion which is $290,000 a year.

“So that is the piece that seems to be the largest component of the risk,” said Cunningham.

Cunningham said backing the bond will not reduce the city’s borrowing capacity.

Sayegh presented the measure to guarantee the bond on Tuesday evening. He had struggled to gain support for the measure from City Council members for the past six months. But that appears to have changed.

“It’s an opportunity for Paterson to dig deep into our history, so that we can present a more promising future for Patersonians,” Sayegh told council members. Part of the opposition included the mayor seeking to guarantee the full project amount. Cunningham said Rivera reduced the amount being guaranteed to $38 million. It was initially $45 million.

Rivera said the mayor did not help his case by unilaterally picking the projects to be funded using the tax credits.

Sayegh used an opaque process to pick the projects the city would fund using the tax credits.

Councilman Michael Jackson criticized the Great Falls projects. He said the projects do little to produce revenue and jobs for the city.

“What the hope is, is if you’re bringing 300,000-500,000 people to Paterson, to that neighborhood, there’s going to be the ability for job growth,” said Christopher Paladino, head of DevCo.

Jackson said a large influx of people also means the municipal government has to provide more services to that area such as policing.

Paladino acknowledged the projects will not produce direct revenue for the municipal government.

“So, we’re asking the taxpayers to go on the hook for a project that’s going to generate no revenue for the taxpayers,” remarked Jackson.

Council members are expected to take a vote on the measure in a special meeting on Thursday, said council president Maritza Davila.