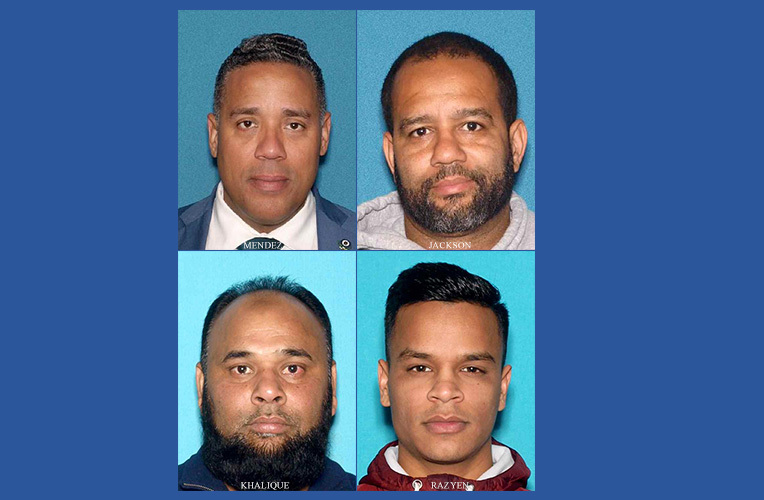 Jackson, 48, of Paterson; Mendez, 45, of Paterson; Shelim Khalique, 51, of Wayne; and Abu Razyen, 21, of Prospect Park, were charged with various voter fraud offenses.

Jackson and Khalique are both charged with fraud in casting mail-in vote, unauthorized possession of ballots, tampering with public records, and falsifying or tampering with records.

Razyen is charged with fraud in casting mail-in vote and unauthorized possession of ballots. Razyen and Shelim Khalique worked for Shahin Khalique’s campaign for the 2nd Ward seat.

“Today’s charges send a clear message: if you try to tamper with an election in New Jersey, we will find you and we will hold you accountable,” said New Jersey attorney general Gurbir Grewal. “We will not allow a small number of criminals to undermine the public’s confidence in our democratic process.”

Authorities said the four men engaged in the improper collection of mail-in ballots. The six ward elections in Paterson were conducted solely through vote-by mail because of the coronavirus pandemic.

Jackson and Mendez allegedly approached voters to collect their mail-in ballots in violation of state election laws. These ballots were then delivered to the Passaic County Board of Elections without identifying the bearer as required by law.

Jackson allegedly had in his possession more than three ballots that were neither his own nor for which he was an authorized bearer. He also received the ballot of one voter that was not voted or sealed. That ballot was delivered to the election board sealed in an envelope without bearer.

Jackson, who is vice president of the City Council, did not respond to a call for comment.

Mendez also allegedly procured or submitted one or more voter registration applications for people he knew were not eligible to vote in a certain election district.

“I am not guilty and I expect to be vindicated. I look forward to serving the citizens of Paterson on July 1st,” said Mendez.

Khalique allegedly went to a residence in the 2nd Ward to collect mail-in ballots from one or more voters. These ballots were delivered to the Passaic County Board of Elections without identifying bearer.

Razyen, who is infamous for appearing in a social media video flipping through a bundle of ballots, allegedly collected ballots. None of the ballots he handled had him listed as the bearer.

“The residents of New Jersey have a right to free and fair elections, and we will ensure that happens,” said Thomas Eicher, director of the Office of Public Integrity and Accountability. “Our office’s criminal investigations complement a number of other safeguards that New Jersey has implemented to ensure the integrity of our elections.”