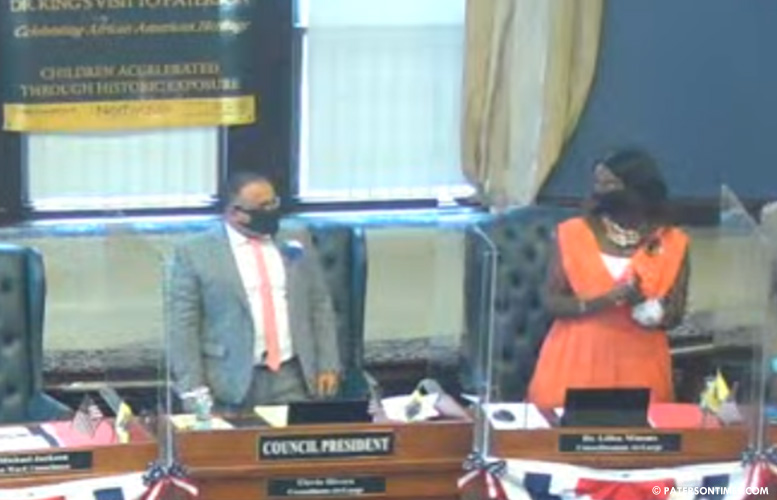 Flavio Rivera was picked to serve as the president of the City Council at the reorganization meeting, first in-person meeting held at City Hall in almost four months, on Wednesday afternoon.

Rivera secured the support of his colleagues in a 6-0 vote. Michael Jackson, 1st Ward councilman, was absent. 2nd and 3rd Ward seats are vacant.

“We all know that we’re going through a difficult time as a nation and as a city. We have to understand Paterson is much bigger than its problems. And I’m sure we’ll overcome whatever we’re going through right now,” said Rivera. “We need to stay positive, but the key component is working together and make sure that we do our diligence to make sure that whatever we do here is the best for the city.”

Councilwoman Lilisa Mimms was picked to serve as the vice president.

Councilwoman Maritza Davila, who served as president for the past two years, tried to nominate Mimms for president.

But Mimms, who had hammered out a deal for the vice presidency, declined her nomination.

Davila then shared a bitter note about her raucous tenure as president.

“These past two years have been quite challenging,” said Davila. “From this pandemic this year, like every year, there’s been something. My colleagues have not been the best at times.”

Davila’s heavy-handed approach and unwillingness to cede power to fellow council members generated much ill-will among her colleagues. She had been trying to retain power for a third bite at the council presidency as late as May. She campaigned hard to keep councilman Shahin Khalique, a reliable ally, on the council.

Khalique lost in the May 12 election. Two of his campaign workers, including his brother, have been charged with election fraud. She also campaigned for Jackson, who is charged with voter fraud.

Councilman Luis Velez and mayor Andre Sayegh, on separate occasions, called Davila a “dictator” over the past weeks.

Davila then read a poem expressing her love for the city of Paterson.

Sayegh welcomed the leadership change on the council. He has often disagreed with Davila and Jackson. Jackson was vice president under Davila.

Council members sat on the dais, wearing masks and separated by plexiglass because of the coronavirus pandemic, while conducting the first meeting of the new fiscal year.