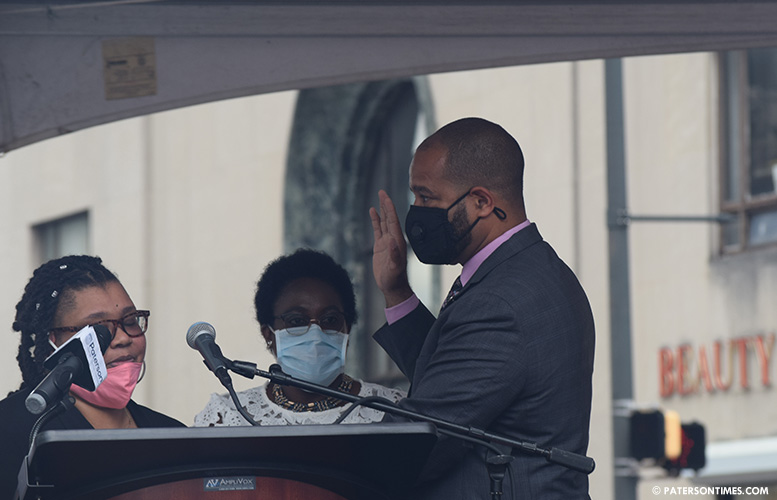 With rain clouds over head, councilman Michael Jackson, charged with voter fraud last week, was sworn in for a second full-term on Wednesday afternoon.

Jackson struck a defiant note, lashing out at the political establishment and law enforcement, in a brief speech after the swearing in outside the historic City Hall in downtown Paterson.

“Only in America, where a black man or a Latino, which I happen to be both, where the term innocent until proven guilty, does not seem not to apply,” said Jackson. “How fair is it that ranking members of the state choose to persecute without any proof of guilt? I’m looking forward to the day to face my accusers.”

Jackson received cheers and claps from many of the roughly 200 people who gathered for the swearing-in ceremony for the winners of the May 12 municipal elections. Nearly 100 people, who gathered behind councilman-elect Alex Mendez, who was stopped from taking office by a court order, clapped for Jackson.

Mendez and his supporters packed the sidewalk across the street from City Hall with signs protesting against the mayor and the political system that has kept their man out of the 3rd Ward seat.

Jackson’s supporters chanted his name and shouted his initials in support of the 1st Ward councilman. He called to the front of the audience, at the closed-off roadway in front of the City Hall, family members of several people killed or mistreated by law enforcement.

“We have the same desires as everyone else. We have families, people who love us, so, I ask you all, please remove the knee from my neck,” said Jackson drawing an allusion to the death of George Floyd.

Governor Phil Murphy and mayor Andre Sayegh have urged Jackson and Mendez to step aside after both men were charged with criminal conduct in the recent elections. Both men have denied the accusations and said they are innocent.

Jackson said people should not judge him before a jury renders its verdict.

Mendez saw unfairness as he stood on the sidewalk and watched Jackson raise his hand and get sworn in as 1st Ward councilman.

Mendez’s opponent, five-term councilman William McKoy, successfully obtained a court injunction to stop him from taking office. Jackson’s main rival, Nakima Redmon, did not seek an injunction, allowing the controversial councilman to be sworn in.

Jackson first ran for an at-large City Council seat in 2014. He lost. He ran in a special election for the 1st Ward seat after the conviction of former councilman Anthony Davis in 2015. He won. In 2016, Jackson successfully retained the 1st Ward seat. He tried his luck for mayor in 2018, but lost against Sayegh.