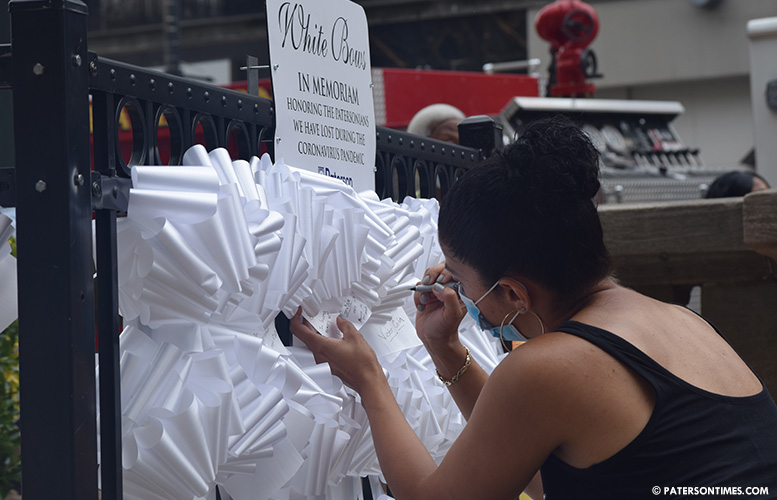 Three-hundred and twenty-nine white bows hung on the wrought iron fences outside the historic City Hall in downtown Paterson.

Each bow represents a resident claimed by the new coronavirus.

Joyce Henry wrote the name of her sister in-law, Josephine McElveen, a nurse’s assistant, who died of Covid-19, on one of the white bows.

Henry said McElveen was her husband’s only sister. Both women were extremely close. McElveen worked at the Christian Health Care Center in Wyckoff.

McElveen likely contracted the virus from the center, said Henry.

“She died the week of her birthday,” said Henry.

307 of those who died of Covid-19 in Paterson were between the age of 50 and 90 or above, according to municipal government data.

Sebastiano Scorpo’s son wasn’t in that age group. Police officer Francesco Scorpo was 34 years old when he died from the virus.

“I lost a son. Paterson lost a hero,” said the father after writing his son’s name on a bow. “He was a big guy, but his heart was bigger.”

Scorpo’s voice broke down and he began to tear while speaking of the untimely death of his son.

Mayor Andre Sayegh held a moment of silence for the 329 Patersonians claimed by the virus. He then had the family members of the deceased residents call out the names of their lost loved ones before a prayer.

“We need to value life more and each other more,” said Sayegh to the more than 100 people gathered for the solemn event. “We don’t want to lose any more.”

Sayegh and his family recovered after contracting the virus. His uncle — 83-year-old John Obeji — did not.

“It is going to get better,” said councilwoman Ruby Cotton, who lost her husband Ed Cotton to the virus.

Cotton said she has tried to remain positive and urged others to do the same. There have been positive developments about the coronavirus crisis in Paterson.

On Thursday, Paterson had just one new infection.

The virus crisis in Paterson began on March 12 with a single case. A man, who worked in Teaneck, brought the virus to Paterson. His entre family was infected, but later recovered.

Since then 6,704 residents tested positive for the virus. Paterson was the epicenter of the virus outbreak in Passaic County.

“It is refreshing to see that we are down to a single case. This was how the COVID-19 outbreak started in Paterson. It seems as if we have travelled through a long bumpy road,” said health officer Paul Persaud on Thursday. “Let us continue to practice the various prevention measures including social distancing.”

Sayegh said people should not stop social distancing and wearing masks just because number of new daily infections has dropped. He urged residents to continue to wear masks and exercise social distancing, particularly during the Fourth of July weekend, when people hold cookouts and gatherings.

“Wear your masks. Focus on your hand hygiene. Take all the necessary precautions so that we did not see any further spread in Paterson,” said Sayegh. 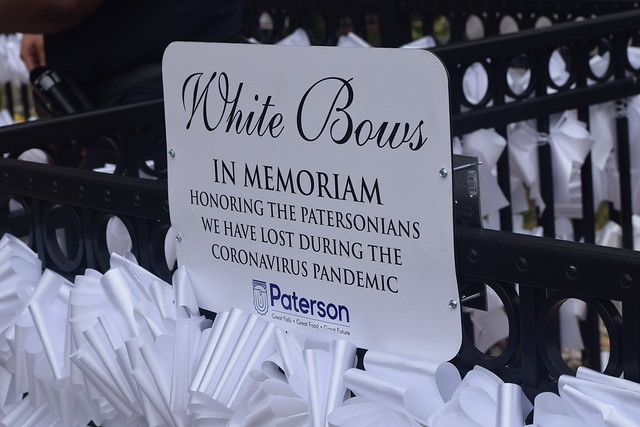