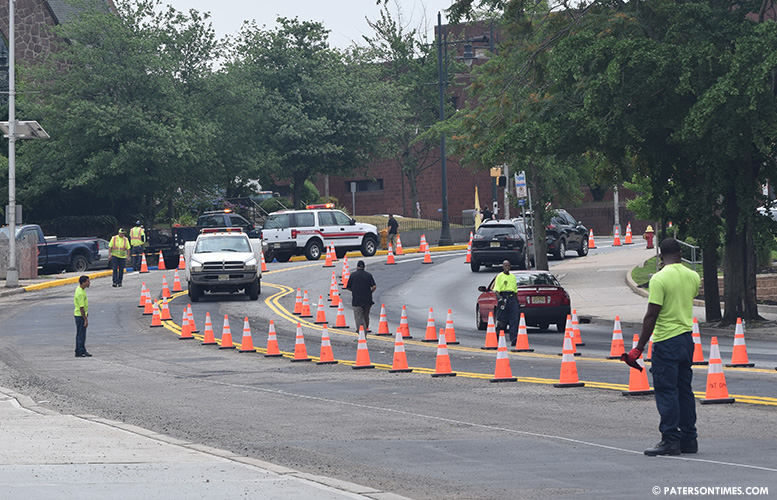 A downtown Paterson roadway that had been partially closed for years because of delayed sewer repair work reopened to traffic on Tuesday morning.

“This day is long overdue. Too many people have been inconvenienced — commuters, our police department, our first responders, think of all the ambulances that have come through here,” said mayor Andre Sayegh standing at the juncture of Memorial Drive, Broadway, and Paterson Street “But today we’re proud to say that after many years of waiting and being inconvenienced, commuters, police department, first responders can breathe a collective sigh of relief because Memorial Drive has four lanes again.”

“It created gridlock,” said Orlando Cruz, manager of the downtown Paterson business district. His members have been complaining about the closure. He raised the issue with the mayor soon after becoming the manager for the business district.

Municipal officials said the sewer repair project cost $7.1 million to complete. A contract to handle the work was awarded in 2015 and involved a 10-foot wide sewer pipe near the roadway for $4.7 million.

“We ran into quite a few problems,” said councilwoman Ruby Cotton.

A new underground pipe had to be installed, but that area had an underground electrical vault, resulting in a change order that raised the price to $7.1 million. The new pipe diverts stormwater through a structure with bar screens into the Passaic River. The bar screens capture debris and other items from getting into the river, according to contractors on site.

A rectangular wooden box that covers a deep hole remains on the sidewalk by Memorial Drive and Paterson Street.

Cotton said she intends tell the administration to address the structure. A contractor on site said that box belongs to PSEG and it has to address it.