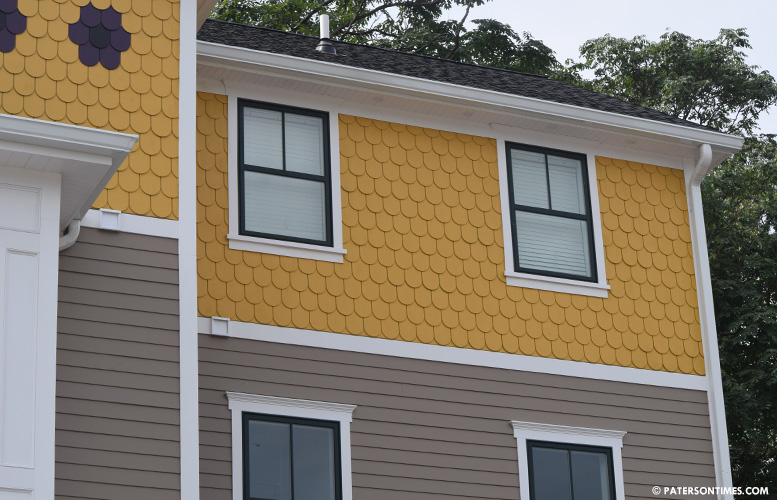 After two years of work, developer Brian White has transformed a fire damaged drug house with a missing roof in the Wrigley Park section, roughest neighborhood in Paterson, into livable apartments.

White spent $1.2 million to rebuild the house at the corner of Auburn and Fair Street into six apartments. It had been an eyesore for nearly a decade.

“I probably went overboard here,” said White on Sunday morning while giving a brief tour of the house. “I did my best to keep some of the old stuff.”

White preserved elements of the old Victorian house such as a fireplace, flooring, and a newel post.

“It’s very rustic,” said White of the preserved inactive fireplace on the first floor. “It’s one of my favorite pieces in the house.”

He says Peter Quackenbush, founder of the famous Quackenbush and Company Department Store in downtown Paterson, owned the property. He said the founder lived at 84 Auburn Street from 1881 until early 1900s. High ceiling, curved staircase, classical tile work, and pocket doors suggest the house was the Quackenbush family mansion.

“It’s absolutely beautiful,” said councilwoman Ruby Cotton, who observed the exterior of the building while driving in the area. “He put his heart and soul into that building. He really worked hard at it.”

White did not cut corners in rehabbing the property that has the word “Crackadopia” spray painted on its retaining wall. He installed hardie board sidings and Marvin windows. He said he avoided “cheap” vinyl windows.

“It’s all high quality and I’m a stickler for that stuff,” said White.

Large windows and the position of the house allows a large amount of natural light to get into the apartments. They also allow residents unobstructed view of both Fair Street and Auburn Street.

Each unit is going for $1,500 to $1,700, said White. Each unit, approximately 650 square feet, has a washer/dryer, a fridge, and a dishwasher. Entire building, including the hallway, has central air conditioning. He has tenants in four of the six apartments.

It took him under 60 days to secure the tenants.

“Everybody so far likes it here,” said White. He has been occupying one of the units for the past weeks, he said.

White said he is still deciding whether to take up residence at the building.

“That area is going to change,” said Cotton. “I would tell him to move in.”

The area has fewer people congregating now than in the past.

White said the fire that destroyed 153-155 Fair Street, a vacant house that was used by drug addicts, helped.

When that building caught on fire in June, White was working at his property. He heard commotion outside and saw a large group of vagrants fleeing the burning house.

“I think it is going to have a domino effect with the other properties surrounding the area,” said Cotton. “You can see the area starting to change up.”

White hopes the property owner or the city will take steps to address the eyesore that is 87 Auburn Street.

“He cannot let it stay like that,” said Cotton of 87 Auburn Street. “The city has to put more pressure on that owner to do something.”

White had interesting experiences, including some terrifying, while rehabbing the property.

White and his contractor were standing outside one day and a bullet whizzed past them.

Incidents were caught on camera, but none were reported to police. He was able to get the ladder back with the aid of a now-tenant. He resolves issues through talking to the perpetrators. He also declines to share camera footage with police. Cameras are strategically placed to avoid capturing an open-air drug market across the street from his property.

Early Sunday morning, White woke up after hearing more than a dozen gunshots. A man was killed a block away on Hamilton Avenue. That hasn’t shaken his belief that the area has vast potential because of its proximity to the Paterson Train Station.

“I really do believe everything from Hamilton down this way (Broadway) has a lot of potential,” said White.

The rehabbing the corner house is White’s first project in Paterson. He owns six properties in Paterson. 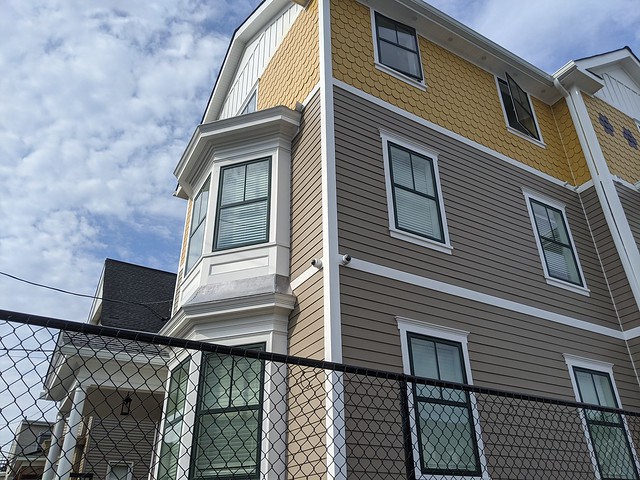