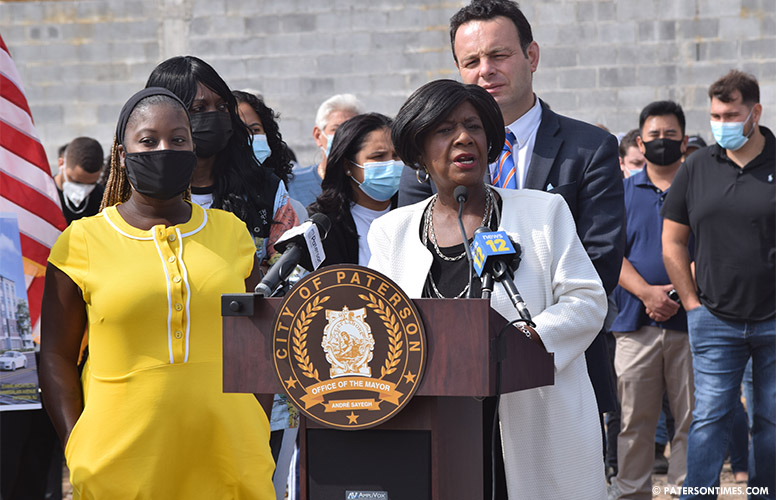 A housing complex on Lafayette Street is being named after former councilman and renowned boxing referee Ed Cotton.

Cotton died of the coronavirus in April at age 72. His family members, including his wife, councilwoman Ruby Cotton, thanked developer Charles Florio for naming the proposed apartment complex at 198 Lafayette Street after the former councilman.

Rendering of the Ed Cotton Residences.

“When they ride down Lafayette Street, the name Ed Cotton is going to be standing out there, and everyone’s going to see,” said the councilwoman Cotton (pictured at podium), standing next to her two daughters, at the groundbreaking ceremony for the Ed Cotton Residences.

“This is just unbelievable. It’s incredible for us. It’s making me so proud. I’m tearing up because I miss my dad,” said Candice Cotton (pictured in yellow). “My dad was just my dad for me. He was always there.”

Cotton refereed a number of famous bouts in boxing. He officiated the Lennox Lewis vs. Mike Tyson fight. Much of Paterson huddled around television sets to watch Cotton.

“We had to do something big for a man who stood at six-foot, five, a towering figure in Paterson,” said mayor Andre Sayegh.

Florio said the complex being named after Cotton will have 72 apartments. It will be approximately 90,000 square feet.

Florio said it will cost $18 million to build the Ed Cotton Residences.

Florio is nearly finished building the apartment complex next door at 188 Lafayette Street. That complex will have 60 units with two retail spaces. He said the price tag on that 72,000 square feet complex is $13 million.

“Besides being a genuinely nice man, he was a fighter for his community,” said Florio, who knew Cotton for six years.

Florio recalled Cotton visiting his office to show boxing memorabilia. Cotton was amazed the developer, who owns thousands of apartments, did not know how to play golf.

“He couldn’t believe I didn’t know how to play golf,” said Florio.

Cotton would get the developer to leave work for the golf course to instruct him on the basics of the game.

Before Covid-19 claimed his life, the Cottons, both the wife and the husband, met with the developer to urge him to keep rents affordable at his apartments. They also pushed him to spend money on a recreation center in the crime-ridden 4th Ward for young people.

“I’ll make sure my company accomplishes both tasks,” said Florio.