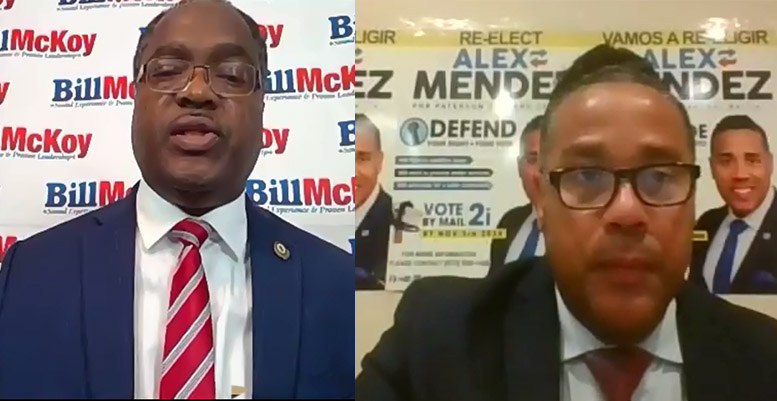 Former councilman William McKoy repeatedly attacked ex-councilman Alex Mendez, calling him a criminal, a cheater, and an unscrupulous person, during a virtual debate on Monday night.

“When the time comes, we’ll definitely clear our name and I will continue serving the residents of Paterson,” responded Mendez (pictured, right).

He focused his firepower on mayor Andre Sayegh, who has bankrolled portion of McKoy’s campaign and legal expenses in the May election that was nullified by a judge. He slammed the mayor for having two assistant business administrators, failing to curb overtime expenses, and constantly raising taxes.

Mendez is widely viewed as a likely contender in the 2022 mayoral race.

“In order to serve, you have to be honest. You have to have some integrity,” said McKoy. “[If] you cannot be trusted with small things, how do you expect the people to trust you with larger things?” He suggested Mendez lacked integrity. McKoy said he has served on school board and the city council for 24 years. “I’ve never been accused of doing anything illegal or been charged. And so, in order to stand up before people, you have to have some personal integrity.”

McKoy said the 3rd Ward has a second election because Mendez “stole the election” that was held in May.

Mendez said residents elected him in May. But a Passaic County judge disagreed and nullified the election finding the election was “not fair, free and [did not capture the] full expression of the intent of the voters.”

Mendez claimed the judge removed him from his seat “without due process.” He pointed out he has not been convicted. “You’re innocent until you are proven guilty. I will have my time in court, and I will clear my name,” he said.

Mendez began to return fire 30 minutes into the 2-hour debate hosted by the Paterson NAACP. Debate, moderated by assemblywoman Shavonda Sumter, was watched by approximately 100 people. He said McKoy mentioned the criminal charges “over and over” because he has few accomplishments to talk about from his past 20 years on the council.

“He has nothing to show. He’s been sitting on that chair, sleeping for 20 year, getting a paycheck without doing nothing. The quality of life of the 3rd Ward has been going down drastically. And it continues going down. There’s no leader in the 3rd Ward to go and take action. That’s why I’m here,” said Mendez. “He is a rubber stamp for the administration. He’s a yes-man for high taxes, voting almost 19 times to raise our taxes.”

McKoy said he won’t let Mendez tarnish his record. He called Mendez’s mention of the tax votes “very lame.” He said the state usually forces the city to raise taxes 2 percent every year in order to receive millions in transitional aid.

“I’ve been serving this community for over 24 years, proudly, with honesty, integrity, trust,” said McKoy. “The Attorney General, the highest law enforcement [officer] in the state of New Jersey, charged Alex Mendez with six separate felony charges, including second degree charges with a presumption of prison time or jail time. So, he can sit there and pontificate this nonsense, but he was charged with election fraud.”

McKoy said no one can accuse him of being a cheater.

Mendez repeatedly called McKoy a “rubber stamp” for the mayor. McKoy has supported initiative backed by the mayor over the past two years.

Both men also outlined their priorities for the 3rd Ward if elected.

Mendez said he will open an office, funded by his council salary, to provide resources to 3rd Ward residents. His office will lead such efforts as citizenship drives and help seniors fill out state property tax freeze forms.

McKoy said crime, drug dealing, and loud music have increased in the 3rd Ward. He said his goal will be to “eradicate those concerns.” He will also lobby to get roadways such as River Street resurfaced. He lamented that many of his opponent seem to not understand the role of a council person. Many of McKoy’s opponent promised to take actions that are apparently administrative and have to be undertaken by the executive branch.

While McKoy and Mendez exchanged blows, Robyn Spencer and Sharrieff Bugg appeared ill-prepared for the debate. Organizers of the debate gave the questions to candidates before hand.

“I want to take initiative to present an ordination [sic] that will allow to increase funding, make it mandatory that the budget include funding for recreation on an annual basis so that it will always be in the budget and we don’t have to fight for it,” said Bugg. “We need recreation for our children, we need opportunity for them to have a safe haven.”

Bugg doesn’t need to present an ordinance because such a line item already exists. Municipal officials appropriated $2.32 million for recreation in the fiscal 2020 budget.

Bugg made a similar blunder when he said he wanted to freeze all employees’ pay. That cannot be done without violating labor contracts and labor laws.

Bugg also wanted to borrow $2 million to create a small business loan fund. He acknowledged he wasn’t sure if Paterson had such a program. Paterson Restoration Corporation, the quasi-governmental agency, is the city’s loan fund. The U.S. Small Business Administration (SBA) also has an office in downtown Paterson.

“I’m a new person on the block,” said Bugg, acknowledging some of his errors. “Some of us are learning as we go on.”

When Spencer was asked about the role of a council person, she said part of it includes serving on committee the mayor puts them on. The mayor does not appoint members to council committees – the president of the council does.

McKoy has previously accused them of coordinating with the Mendez campaign. Neither Spencer nor Bugg mentioned the charges against Mendez. Both argued McKoy has taken the 3rd Ward seat for granted.

Spencer claimed McKoy has been busy serving the Jamaican community at the expense of others. But Mendez accused McKoy of not doing enough to help Jamaican businesses in the 3rd Ward.

Mendez accused McKoy of commandeering the annual Jamaican Festival held in Eastside Park from one of his Jamaican supporters, Keith Watson. “You stole the event from him. You talk about honesty?”

McKoy, who hails from the Jamaican community,  did reply to Mendez’s allegation.

Bugg said the result of “so many years of experience” is displayed in lack of services and many quality of life problems in the 3rd Ward.

“The ward has gone down under the current and you have to change the guard,” said Spencer.

The five-person 3rd Ward race is largely viewed as a battle between Mendez and McKoy. Chauncey Brown, the fifth candidate in the race, did not attend the debate.

Brown has a bribery conviction and is unlikely to be able to take office if elected.