Paterson man hasn’t voted for decades because of criminal record. He just registered to vote in November. | Paterson Times 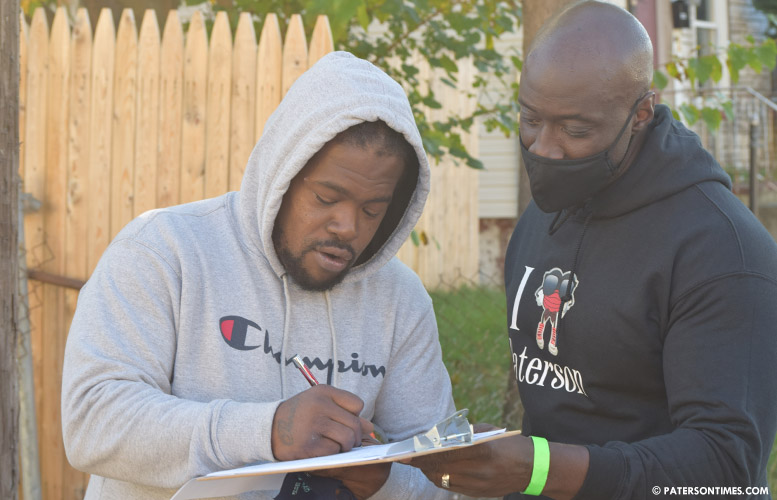 41-year-old Qayyum Montgomery has never voted in his entire life because of his entanglement in the criminal justice system.

“I was always in trouble,” said Montgomery, who has half dozen criminal convictions, on Friday afternoon. He said he committed armed robbery at age 15 and was charged as an adult. He was arrested three years ago for allegedly dealing drugs. “Criminals can’t vote.”

But he can vote. Governor Phil Murphy late last year signed legislation into law that allows former criminals, like Montgomery, on probation or parole to register and vote.

Montgomery is among the 80,000 people whose voting rights were restored as a result of the new law.

“I’m happy to have a chance to vote,” said Montgomery (pictured, left) after filling out a voter registration form.

Montgomery was among 70 people registered to vote by the group called “We Believe” that’s spearheaded by attorney Kenyatta Stewart.

Stewart (pictured, right) held the clipboard while Montgomery filled out the form on 10th Avenue.

“I’m voting for Trump anyway,” Montgomery joked when Stewart and others approached him in the street corner to get him registered.

Stewart is a Democrat who serves as chief attorney for Newark. He did not engage Montgomery in political discussion. He had told the 30 volunteers, who were part of the caravan to register voters in high crime parts of Paterson, not to engage in political debates during a pep talk at the Vreeland Triangle, where the group met to begin their campaign.

Stewart told the volunteers their goal is to get people registered not to fight or argue over presidential candidates.

Stewart once represented Montgomery in a criminal case.

“I’m glad he came,” said Montgomery of Stewart. Stewart had him complete the form before the October 13 deadline for registrations.

Montgomery said he watched the vice presidential debate between Kamala Harris and Mike Pence. He said he was impressed by Harris. He is looking forward to receiving his mail-in ballot to cast his vote on November 3rd, he said.

Stewart and the volunteers targeted six spots in Paterson. Each future voter was given a raffle, said Jada Fulmore, who runs the New Jersey Reentry Corporation’s program in Paterson. Her group was part of the effort to register former convicts.

Fulmore said laptops, gift cards, and food store cards would be raffled at a block party on Presidential Boulevard.

“We know many people are re-united, re-acclimated with their families, and now we’re trying to get them re-acclimated in society,” said Stewart.

“Now they feel like they are” part of the community, said councilwoman Ruby Cotton. “It should have been done long time ago.” 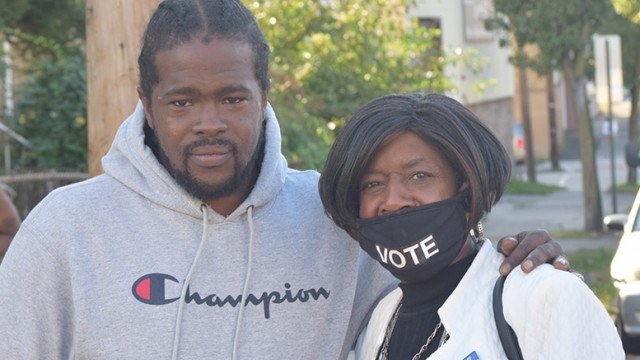 Stewart said a lot of formerly incarcerated people have children who attend public schools. “You can go get your kid every day from the school, but you can’t vote for the folks who are running the place,” he said.

Stewart said some of the people who he met on the streets said they were not aware of the new law that allows them to vote.

“The rules have changed. We have to educate them,” said Stewart.

“It was like winning a lottery,” said Teddie Martinez, 52, who voted for the first time last year. He had been convicted of federal drug offenses.

Martinez started voting before the new law was passed. He has registered about a dozen people on parole or probation after the new law came into effect, he said.

Volunteers also registered people who did not have any criminal records.

Bre Azanedo, a volunteer, registered 19-year-old Mikuel Martinez, not related to the other Martinez. He was walking by the Vreeland Triangle when Azanedo approached him.

Azanhdo said it took just five minutes to get Martinez to complete the voter registration form.

Are you going to vote in November?

Martinez revised his answer and said he will vote.

“I never got a chance to vote. But I always wanted to. The reason why it’s important is because if you don’t vote, sometimes, a person like Trump could get back up in there,” said Montgomery.

Montgomery, who said Trump has been bad for the U.S., plans to vote for Joe Biden.