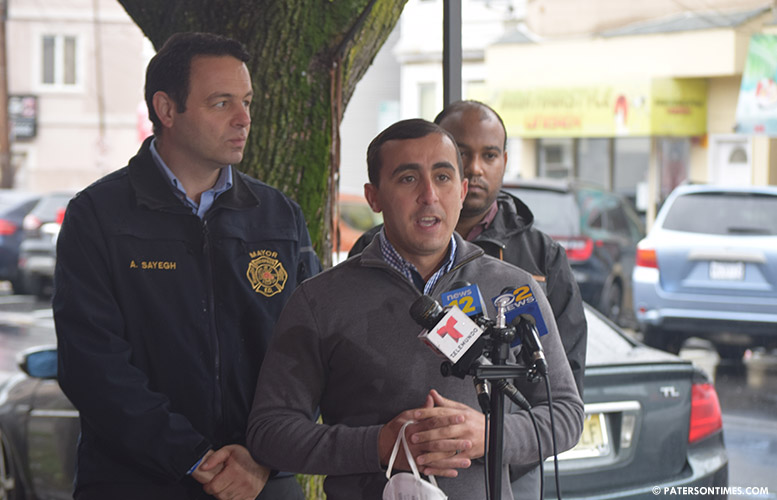 Councilman Al Abdelaziz said double parking created bottlenecks, slowing down vehicular traffic as motorists tried to go around vehicles. Sayegh said people were discouraged from coming to 21st Avenue, a busy commercial corridor in the People’s Park section, because of lack of parking.

Abdelaziz said the reconfiguration makes the corridor much safer for pedestrians.

“It looks beautiful,” said Abdelaziz of the changes. He said the Paterson Parking Authority covered the expenses. He said new signage was installed in the seven-block portion of 21st Avenue.

“This is going to increase people coming to our area,” said restaurant owner Juan Diego Correa. He has owned the Correita El Paisa Restaurant for five years.

Other business owners described the change as “excellent” for businesses and patrons.

Abdelaziz faced some opposition from seniors living at the former Governor Towers on 20th Avenue. Many feared a big increase in vehicular traffic on 20th Avenue as a result of the changes.

“This was a heavy push,” said Abdelaziz.

Traffic has increased on 20th Avenue, said Bill Priestly, who lead the protest against turning 21st Avenue into a one-way.

Abdelaziz and others promised the seniors 20th Avenue would be changed to enhance pedestrian safety. At the time he said it would include poles that pedestrians can press before crossing, speed humps, improved road markings, and better signage.

None of that has happened, said Priestly.

Abdelaziz said it’s the responsibility of the Paterson Parking Authority to make those changes on 20th Avenue.

“We were supposed to do that,” said Sayegh. He said he will follow-up. “We owe it to them.”

Sayegh said turning 20th Avenue into a one-way may also be an option.

“That’s one of the things I was trying to look into when all this started,” said councilman Luis Velez. He worried about emergency vehicles having to take a longer route to get to the senior complex if it’s turned into a one-way. “I don’t have a problem having that conversation. I will do whatever my constituents decide to do.”

Priestly said he is in favor of turning 20th Avenue into a one-way to improve safety for pedestrians. He said that could free up a lot of parking spaces for seniors. He said many seniors have to park far away and walk to the apartment building because of lack of parking on 20th Avenue.

Both the mayor and Abdelaziz pointed out the changes to 21st Avenue is just phase one. A bigger project is expected to begin next year.

“There’s going to be more of a positive change to the environment,” said Abdelaziz. He is referring to a $500,000 streetscape project to beautify 21st Avenue.

Story updated on October 15 with spending information from Tony Perez.