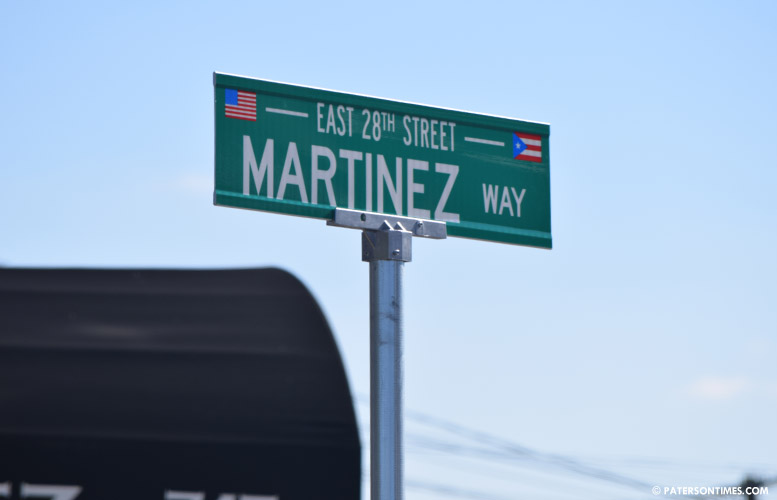 Councilman Luis Velez unveiled a street sign last week paying tribute to a convicted funeral director who stole $56,000 that were intended for funerals for poor families.

Velez was the sole member of the City Council to attend the ceremony. Other politicians who attended the street naming ceremony were mayor Andre Sayegh, assemblyman Benjie Wimberly, state senator Nellie Pou, and congressman Bill Pascrell.

Sayegh and the convicted funeral director’s son are childhood friends.

Velez had convinced his colleagues on the City Council in early October to approve a measure naming the intersection of Market Street and 20th Avenue to “Martinez Way” after deceased funeral director Manuel E. Martinez.

Velez claimed he was not aware of the conviction. Martinez’s son school board member Manny Martinez, who lobbied for the street naming, never made him aware of it, he claimed in mid-October.

Many council members said they knew nothing about the conviction when they voted to approve the measure.

Velez said he would bring the measure back for reconsideration in mid-October. He never did. When asked by a reporter later in the month, Velez falsely claimed the measure had to be brought back by the council president.

Velez appeared to prevaricate to avoid responsibility for his measure. He later said he was “okay” with naming a street after a convicted criminal. He also said he didn’t want to take back an honor he had already given.

“We’re not honoring him. We used his biography to support the Martinez Way,” said Velez.

But that’s not true. His measure states the naming is to mark the third anniversary of Martinez’s death and 50th anniversary of him being in business in Paterson. Martinez founded the Martinez Funeral Home at the intersection.

“We took the good part of him because that’s the part that they presented,” said Velez.

Velez was the main sponsor for the measure. It was co-sponsored by council members Al Abdelaziz, Flavio Rivera, and Maritza Davila.

Martinez stole $56,150 in funds that were to go towards paying for funerals for indigent families. He admitted to the crimes in 2009 and pleaded guilty to third-degree theft by deception.

As then-owner and funeral director of Martinez’s Funeraria Latina on Market Street, Martinez provided funeral services to people on public assistance. He was eligible to be reimbursed $2,246 per dead person from the Passaic County Board of Social Services to subsidize cost of the funeral service. Families and representatives of the deceased could contribute $1,570 for funeral costs without Martinez losing the subsidy.

Between January 1 and December 31, 2018, Martinez admitted to submitting 25 fraudulent reimbursement applications to the Passaic County Board of Social Services, according to the charges that were filed against him. He falsely claimed he was eligible for the full $2,246 subsidy and that he had not received more than $1,570 from the deceased person’s representatives. State investigators found Martinez submitted false statements on behalf of family representatives without their knowledge. He also forged their signatures on documents. He received reimbursement for the maximum $2,246 despite accepting payments of more than $1,570 from representatives of the deceased. At the time, authorities said Martinez illegally collected $56,150. He was given a sentence of probation. He had to pay $56,150 in restitution and surrender his funeral director’s license.

Martinez was the first Puerto Rican to be licensed as a funeral director in New Jersey, according to the resolution. He worked for three years for the Paterson Parking Authority after his conviction. He died in 2017.