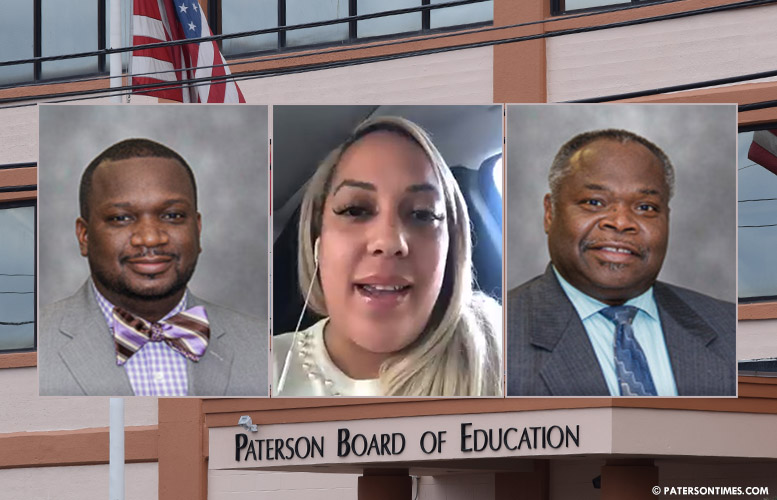 Incumbents Jonathan Hodges, Kenneth Simmons, and newcomer Dania Martinez won seats on the Board of Education.

Majority of the votes have been counted. Only provisional ballots remain to be counted. Results are unlikely to shift after the provisional count.

Simmons won his fourth term on the school board. He was first elected in 2010.

“I’m glad to be back. We still have a lot of work to do, especially as we gain local control. Now, you can’t blame the state,” said Simmons, who serves as the president of the Board of Education.

Paterson schools have been under state control since 1991.

Simmons (pictured, left) said he will focus on restructuring high schools. He wants students graduating from Paterson schools to have certificates that would help them obtain jobs. He also wants the district to hire local people and firms to keep jobs in Paterson.

Hodges won his seventh term on the school board. He was first elected in 2002.

“I campaigned by working hard as a school board member every year that I have been on there and that paid off,” said Hodges (pictured, right). His campaign was mostly on Facebook this year because of the Covid-19 pandemic.

Hodges said his focus will be on improving quality of education in the district.

Both Hodges and Simmons said they avoided traditional campaigning, such as knocking on doors and in-person interaction with voters.

Simmons and Irving had billboards in various parts of Paterson. Their campaign also sent out mailers to voters.

Martinez (pictured, center) aligned herself with City Council candidates Alex Mendez and Shahin Khalique. Both Khalique and Mendez ran aggressive campaigns as if there was no pandemic, according to sources.

Martinez did not respond for this story.

Sole incumbent to lose was Joel Ramirez. He received 13,586 votes. He was elected three years ago and served a full term.

“I honestly campaigned as hard as I could,” said Ramirez. He said he tried to reach voters through mail and social media. “I didn’t want to put my life or my family at risk by going door to door. I think that hurt me.”

Some of those that did go door to door for other campaigns have tested positive for Covid-19.

Ramirez mentioned some of the issues he championed during his term.

“I led the charge in the halal food [initiative]. And I was very vocal about the restructuring of the high schools,” said Ramirez. “A lot of things we do is collective. You can’t really take full credit for specific things.”