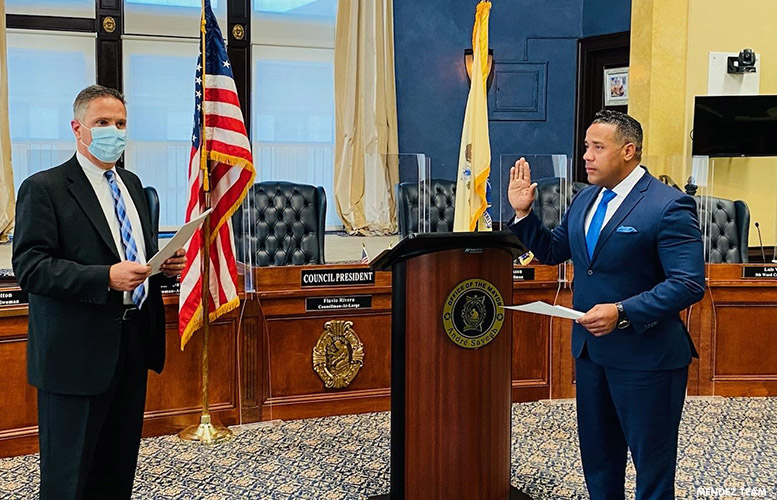 Former councilman Alex Mendez, who had been jittery and anxious after winning the 3rd Ward seat on the City Council last week, was sworn in on Monday.

Mendez worried about a replay of the May scenario, when a judge, at the request of his defeated opponent, barred him from taking office because of alleged voter fraud. Mendez was charged with voter and election fraud. He has denied the charges.

“I was waiting for this moment. I’m excited and very humbled. Thanks God for this opportunity to serve again,” said Mendez.

Mendez won by just nine votes in the November 3 race, a do-over of the May election.

Mendez’s main rival, former councilman William McKoy, is challenging the outcome in court. McKoy has filed for a recount on Friday.

When asked if he is worried about the recount, Mendez said, “Not at all. If they go through the recount, I’m very sure we’re going to get more votes.”

McKoy had filed for recount in May. “It didn’t change anything the first time. It’s not going to change anything now,” said Mendez. But McKoy was behind by hundreds of votes in the May race. This time, McKoy lost by just nine votes.

Mendez previously served as an at-large councilman from 2014 to 2018. He opted not to defend his council seat and ran an unsuccessful campaign for mayor. He finished second place behind mayor Andre Sayegh in the 2018 race.

Sayegh has aggressively campaigned for McKoy against Mendez.

“It’s very sad that instead of concentrating on running the city and addressing the crime that has been going on and lack of services, he’s been concentrating on attacking me,” said Mendez speaking of Sayegh. “He campaigned more than Bill McKoy this time around. He knocked on doors everyday against me. We didn’t elect him to do that. I used to see him in the afternoon knocking on doors. I believe he made a big mistake and I hope he changed his ways.”

Sayegh has funded McKoy’s campaign and his legal fight against Mendez.

Mendez said he is still open to working with the mayor.

“I hope he changed. I look forward to working with everyone to make Paterson better,” said Mendez. “If what he puts on the table is good for Paterson, I’ll be there supporting him. But if the decision he is making is not good for our city, I’ll be the first one against that.”

Sayegh said he is open to collaborating with Mendez.

“I’m going to hold him true to his word,” said Sayegh. He said his administration has an “ambitious vision” for the city and is open to collaborating with Mendez.

Mendez is likely to challenge Sayegh for mayor in two years. “That’s not on my mind right now,” he said when asked about it on Monday.

Another Sayegh critic, former councilman Shahin Khalique, won in the 2nd Ward. Sayegh had backed Khalique’s main rival former councilman Mohammed Akhtaruzzaman. With Mendez and Khalique on the council, some expect Sayegh to have a hard time securing support for his initiatives.