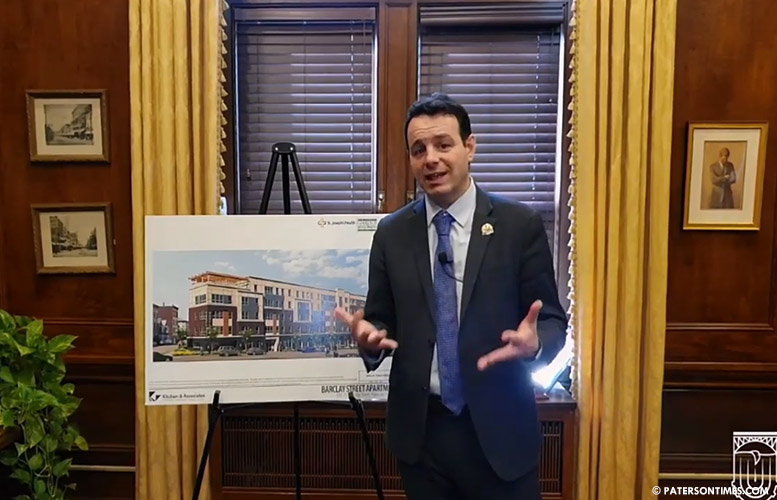 Mayor Andre Sayegh touted his Covid-19 pandemic response and park improvements in his second state of the city address on Monday afternoon.

Sayegh said he led a “swift” and “decisive” response to the pandemic by citing the city’s testing program, senior food delivery initiative, and vaccination center.

“The pandemic has exacted a heavy toll on Paterson,” said Sayegh, standing in front of hundreds of white bows installed outside City Hall to honor those claimed by the virus.

The 40-minute pre-recorded video showed Sayegh outside the mayor’s office door, inside the council chambers, and in front of City Hall. His video also featured four other speakers, many of whom praised his leadership.

Sayegh did not mention his failure to institute Covid-19 testing early on in the pandemic or his recent move to scale back testing as experts predicted a surge in cases after the holidays.

“If you haven’t gotten what I’ve been saying for the past few minutes, parks and recreation are a priority of my administration and we’ll continue to invest with grant dollars,” said Sayegh.

Parks are at the “top of our agenda,” said Sayegh.

Sayegh also said he is working to add 60 new police officers this year. He also touted the police bodycams.

“The nation has seen a spike. Paterson is no different,” said Sayegh in speaking about the surge in killings and shootings.

Members of the City Council reacted to the mayor’s speech soon after the live-stream ended.

“I’m unimpressed,” said council president Flavio Rivera. “The bottom line is services have not improved and the administration has not been able to execute many of the initiatives the council has approved that will benefit the residents of Paterson.”

Rivera cited Sayegh’s failure to implement a program that requires developers to submit deposits to offset costs incurred in reviewing their building plans and the sewer reforms. He also pointed out Sayegh partially implemented the bodycam program.

The council bought 150 cameras. Sayegh has just 25 officers using them. He was two years late in implementing the bodycams.

“I just want them to get on the ball and do what they were hired to do,” said Rivera.

Councilman Luis Velez disliked the format of the address. He said the mayor should have held the state of the city speech inside the council chambers, where he has conducted many press conferences over the past months.

Sayegh’s latest speech, in a series of segments, appeared to be improvised as well. The pre-recorded speech was live streamed on YouTube.

Adofo-Wilson is the developer tasked with renovating Hinchliffe Stadium. Sayegh said he intends to get the stadium renovated during his tenure.

“We’re bringing it back,” said Sayegh of the stadium. Adofo-Wilson said construction will start in 30-40 days.

“I was expecting a little more substance,” said Velez, who is an ally of the mayor. He said he did not hear any new initiatives. “I was very disappointed.”

“He doesn’t have any plans for Patersonians,” added councilman Alex Mendez. “He failed to provide testing site at the beginning of the pandemic. Thousands of Patersonians got sick and couldn’t get tested.”

Mendez is expected to run against Sayegh for the mayor’s seat next year.

Mendez said Sayegh’s response to the pandemic has been poor from the start. He pointed out Sayegh’s move to scale back testing late last year after federal Cares Act funds ran out.

“This has been one of the worst mayors in the city of Paterson,” said Mendez.

Mendez said the Sayegh administration is “robbing” homeowners through its botched sewer reforms.

“Someone who does not follow the city will see this and say, ‘They’re doing a great job,’” said Rivera.

Sayegh’s address began with first lady Farhanna Sayegh giving a brief tour of the basement from which the mayor ran the city in April after contracting Covid-19.

“This was our bunker. He was providing live Facebook updates to residents to make sure you understood what was going on,” says the first lady in the video. “My husband was born and raised here in the city of Paterson. He wants nothing more than to see this city progress, to see the city thrive for our children and for your children.”