Paterson struggling to dig out after massive snowstorm | Paterson Times 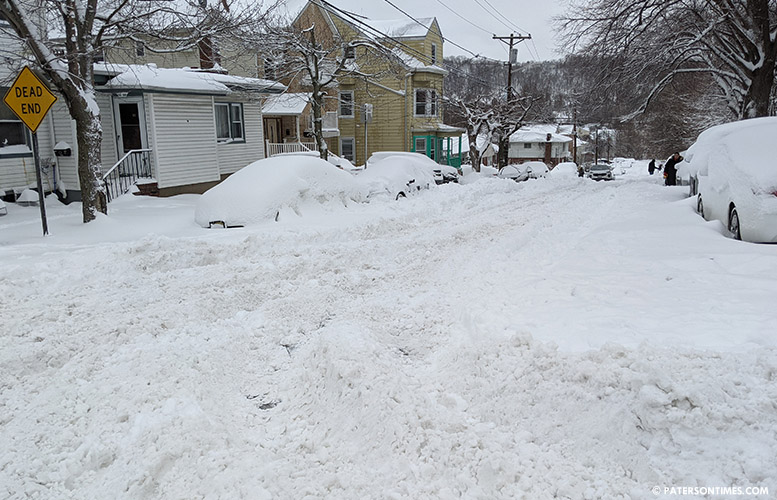 Mayor Andre Sayegh is urging residents to be patient as public works employees clear the roadways after the massive three-day snowstorm that dumped two feet of snow.

Residents have been bombarding officials with phone calls and texts that their streets have yet to be plowed. Many of the secondary roadways remained uncleared on Tuesday morning.

“We’re just plowing away. Operative word is to be patient,” said Sayegh.

Rodriguez said public works crews have cleared the primary roads throughout the city.

“It’s almost impossible to drive around here,” said councilman Alex Mendez, chairman of public works. He said all the side streets are “a mess.”

Mendez said he was told at a meeting on Friday that Paterson was prepared for the storm. “Everything was yes, yes, yes,” he said. He said he is disappointed with the city’s response to the storm.

Mendez said some residents missed work because they couldn’t use the roadways to drive to their place of employment.

The effort to clear the roadways hit a snag when 8 of the 30 vehicles broke down, said officials.

“You’ve had a storm that spanned three days. Yesterday, there were points during the day, where you got two inches per hour. So, you can plow but it takes some time to catch up. But then the snow starts to pile up,” said Sayegh.

Sayegh said this is the worst snowfall he has seen in 25 years.

“It was a record storm,” added Rodriguez. Employees also had to take rest periods because of the long duration of the storm, he said.

“It was awful,” said councilman Luis Velez. He had to call the mayor to send a truck through his street to clear the roadway. He said a car that broke down at the entrance to the street impeded the plow truck. “DPW is trying to do their best.”

Velez was previously chairman of the public works committee. He often surveyed the streets and ensured roadways were cleared. He also ensured repair bills were paid so no trucks remained at the shop.

Rodriguez said snowblowers and people shoveling out are throwing a great deal of snow into the roadways.

It’s unlawful to throw snow into the roadways.

Sayegh said the city has collected license plates for some and will issue tickets.

“I think we got walloped and our fleet couldn’t handle this type of snow,” said councilman Al Abdelaziz.

Abdelaziz said the city should have had some contractors on standby to call in. He said there has to be better contingency planning.

Abdelaziz said now the administration needs to come up with a snow removal plan to free up parking spaces.

Both Sayegh and Rodriguez outlined an ambitious goal to clear the roads at the end of the day.

“I will say right now, we’re going to try to have everything clean by 5 p.m.,” said Rodriguez.