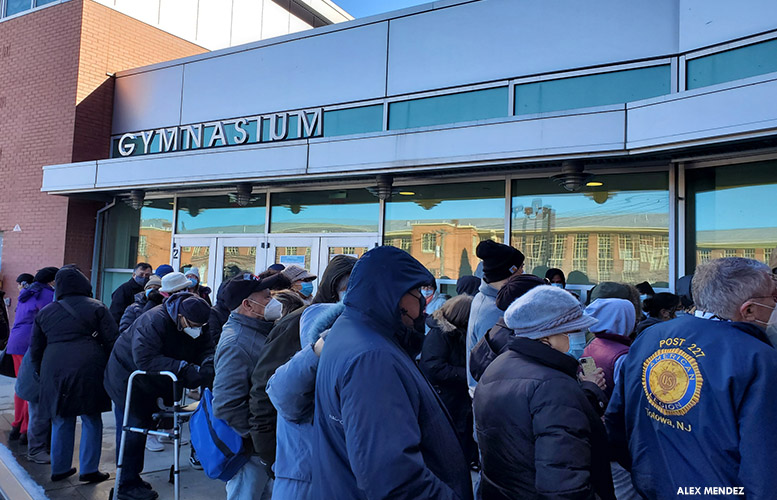 Hundreds of residents lined up to get their Covid-19 vaccines at International High School. They were told vaccines had run out on Thursday afternoon.

Mayor Andre Sayegh’s administration curved out a one-hour window from 2-3 p.m. on Thursdays and Fridays for residents. A flier states residents could start lining up at 1 p.m. Little after 1 p.m. on Thursday, they were told there were no vaccines left for them.

“There’s close to 500 people outside,” said councilman Alex Mendez, who shot a video of the long line that snaked behind the high school. “They sent a flier out that they are going to take walk-in Patersonians from 2-3.”

A reporter observed as many as 200 people lined up at the site on Thursday afternoon.

Mendez said Sayegh also did a robocall and email blast to urge residents to come out. He also did a press conference with religious leaders at the site on Thursday morning to get them to urge their congregations to get vaccinated.

Sayegh should have known there were limited number of doses. Paterson received 700 doses of the Moderna vaccine this week.

“You don’t do that. What a disaster,” said Mendez, who visited the site after getting dozens of phone calls from residents.

Almost all of the people on the line were Paterson residents, said Mendez, who spoke to many of them.

They lined up for the walk-in option.

The vaccination site handled people with appointments from 9 a.m. to 2 p.m.

“When I was there it was packed,” said councilman Luis Velez, who attended the mayor’s press conference encouraging residents to get vaccinated in the morning.

Majority of those registering for appointments are non-residents, according to officials. Paterson has a significant number of immigrant and elderly residents, many of them are unlikely to be able to navigate the state registration system.

“Most of the people getting vaccinated at the site are not Paterson residents,” said Mendez. “Something has to be done. The mayor from Wayne is taking care of Wayne residents. He is clear, he’s not playing games like Andre Sayegh.” He has said Sayegh is using the vaccination site to campaign. Sayegh has denied the accusation.

Paterson has administered 8,300 first doses and 4,000 second doses. Majority of the doses were given to non-residents.

Sayegh’s antics might discourage minorities from getting vaccinated, said Mendez. Blacks and Hispanics have the lowest vaccination rates. The two groups make up the majority of Paterson’s population.

“If you look at my live video, you will see all Blacks and Latinos on line outside International High School,” said Mendez.

Mendez suggested some of those that lined up for hours and were told there are no vaccines might not return to get their shot.

“People are getting discouraged,” said Mendez.

Mendez said residents should have been given first dibs at the vaccine.

“I think the best thing is to have residents of Paterson all day,” added Velez. He said a window could be created to accommodate non-residents.

Velez does not favor the appointment system which renders vaccination inaccessible for vulnerable residents.

The vaccination site previously had long lines of non-residents. But that was corrected by Paterson using the state appointment system at the suggestion of council members. Health officials were also giving out numbers to people on line previously, but that system was inexplicably scrapped.