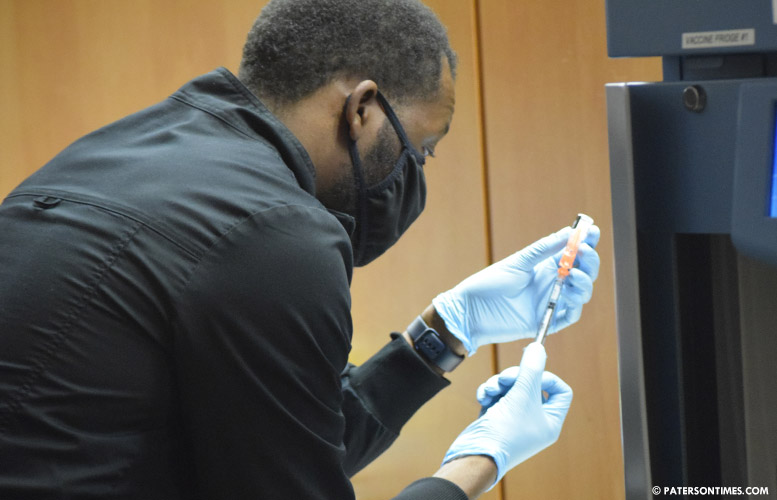 The vast majority – as much as 80 percent – of the Covid-19 vaccines being administered at International High School are now going in the arms of city residents, said health officer Paul Persaud on Thursday night.

“We made tremendous changes,” said Persaud during the emergency City Council meeting. “Now we’re giving 80 percent of vaccines to Patersonians.”

Persaud said that has been occurring over the last two weeks.

Health officials in January had said less than 25 percent of vaccines were being administered to Paterson residents.

“What percentage of vaccines that were given at our vaccine site were given to Patersonians?” asked councilman Shahin Khalique.

Neither Sayegh nor Persaud had the percentage figure Khalique was seeking.

Murphy’s decision led to the long lines of out-of-towners, mostly elderly with comorbidities, who camped out overnight at the vaccination site for their shots, according to multiple health officials.

Paterson, among the most densely populated places in the country, was hit hard by the Covid-19 pandemic. As many as 600 people likely died of Covid-19 in Paterson last year, according to an analysis of excess death data.

Persaud is prioritizing walk-ins over appointments. Paterson has large numbers of immigrants, elderly, and people without internet access, who are unlikely to be able to navigate New Jersey’s registration and appointment system to get their shots.

Persaud had set up his initial vaccination site as a walk-in. His was the only walk-in vaccination center in New Jersey.

Long lines of out-of-towners prompted an emergency Board of Health meeting. Some council members demanded the Sayegh administration move to an appointment system.

Persaud was forced to change to a mixed system – some walk-ins and some appointments. Most of the appointments were being booked by non-Paterson Passaic County residents.

Persaud told council members it was their idea to move to an appointment system.

Next week, Paterson will receive 1,500 vaccines, said Persaud. He said 300 will be allotted for appointments and 1,200 for walk-in Paterson residents.

Council members held the emergency meeting on Thursday to discuss the dispute between the city and the school district.

School officials want the city to pay $220,000 for using their nurses, custodians, and security personnel at the vaccination site.

Some council members raised questions about the district’s demands.

“Didn’t we have a shared services agreement prior to opening that site? All the sudden we are getting hit with a $200,000 bill,” remarked Khalique.

Law director Farrah Irving explained the city has a 2016 agreement with the district.

Sayegh at one point tried to take a swipe at Khalique.

Sayegh repeatedly interrupted council members in the in-person meeting. He also spoke over the council vice president, who presided over the meeting in absence of the president.

“From what I see, you’re failing to fight for Paterson, especially when it comes to Covid,” said councilman Michael Jackson. “You failed to stand up for Paterson.”

Sayegh claimed “we,” suggesting the city was vaccinating people at the church. The site is run by the Federal Emergency Management Agency (FEMA) and the United States Department of Defense.