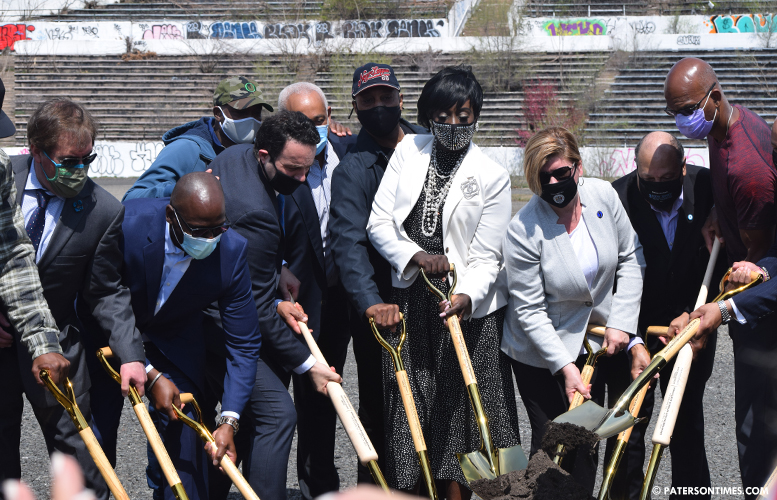 Mayor Andre Sayegh and other officials broke ground on the long-awaited project to restore the historic Hinchliffe Stadium, one of the last remaining places where the legendary Negro leagues held baseball games in a racially segregated United States, on Wednesday morning.

“History happened here. History will happen here again,” said Sayegh. “When African Americans were excluded and barred from playing in Major League Baseball, they had a home here in Paterson.”

Doby was the second player to break baseball’s color barrier. He broke the color barrier in the American League while Jackie Robinson broke it in the National League. History was not enough to keep the stadium open. Hinchliffe Stadium, which opened in 1932, has been in a state of disrepair for more than 20 years. It closed because of neglect in 1997.

“It’s sad it’s been closed for this long,” said developer Baye Adofo-Wilson, who is leading the restoration of the stadium. “We are preserving a portion of American history that’s all too often glossed over.”

His firm BAW Development is working with RPM Development to restore the stadium. Total price tag for the project is $93.77 million, according to state documents.

The renovated stadium will have 7,800 seats. It will also have a restaurant and a museum dedicated to Negro leagues baseball. Part of the project also includes the construction of 75 units of low-income housing at a vacant lot behind School 5. Life Management, a nonprofit, will provide social services for seniors at the housing project. The project also includes a 315-space parking garage.

“You know how it is, it’s starts and stop with this stuff,” said LoPinto, who fought for nearly two decades to get the stadium restored. But he is optimistic this time is different. “I think it will get done.”

LoPinto said Adofo-Wilson has experience working on historic preservation projects. He pointed out Adofo-Wilson worked on restoring the Hahne’s Building in Newark.

Adofo-Wilson said construction will begin later in April. Officials said the project will be finished in August 2022.