‘You are unwelcome.’ Paterson rivals McKoy and Mendez get into altercation at Eastside Park. | Paterson Times 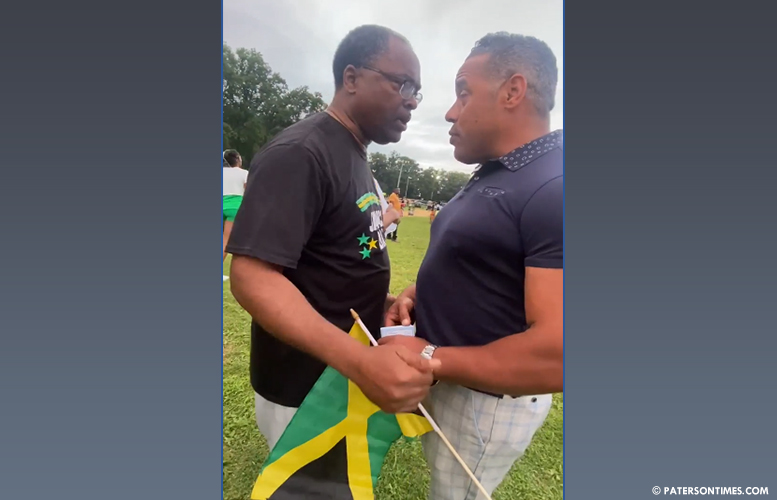 Former councilman William McKoy held the annual Jamaica Day Festival at Eastside Park over the weekend. He was displeased to see his political rival, councilman Alex Mendez, who defeated him to win the 3rd Ward council seat, at the event on Sunday evening.

McKoy is seen in a brief video confronting Mendez.

“You are unwelcome here!” McKoy, a former five-term councilman, tells Mendez. McKoy is seen flailing his hands and getting ever closer to Mendez’s face.

Mendez largely remains calm. He is heard saying, “Put your hands down.” Others are seen intervening and pulling McKoy away.

“You’re not Jamaican. Go away from here,” another man, standing next to McKoy, tells Mendez.

It’s not clear what triggered the hostilities at Eastside Park between the two men. Both men have built up considerable bad blood over the past year and half by fighting for the same 3rd Ward City Council seat.

Mendez said he appeared at the event to show support for the Jamaican community. He said considerable number of Jamaicans live in the 3rd Ward.

“He was about to punch me,” said Mendez, speaking of McKoy, on Monday morning. “He looked like he was drunk.”

Mendez said he had a right to be at the event held at a public park.

“It was very disturbing. I’m thinking about pressing charges against him,” said Mendez.

McKoy did not return a call for comment on Monday morning.

Mendez’s friend, Omar Ledesma, was allegedly attacked by a woman at the event. Ledesma said a woman, who is tied to McKoy’s campaign, belligerently grabbed him by the shirt.

Ledesma captured both incidents using his phone camera. Some of McKoy’s allies demanded he cease recording, but he refused to comply.

Ledesma late Monday said he filed charges against the woman for alleged assault and McKoy for alleged incitement.

“It’s unacceptable what he did,” said Mendez. “I’m asking for a public apology.”

Mendez stayed at the event even after the altercation.

Mendez said people, mostly Jamaicans, welcomed him at the event with open arms.

“What made him so angry was that everybody was so happy to see me there,” said Mendez. “Everybody was greeting me and taking pictures with me.”