It was ‘one love’ in Amistad Park on Saturday as Jamaicans gathered with city and state officials to rename a section of Vreeland Avenue to “Jamaica Way.”

Everyone got together and was feeling alright when Andre Sayegh unveiled the new street sign at the corner of Vreeland and 19th avenues. Jamaicans have put a big stake in Paterson during the past 40 years, and now they have a portion of Vreeland named after them to remind everyone of their contribution.

“We have arrived,” said Owen Eccles, the president of the Passaic County chapter of Jamaica Organization of New Jersey, which organized the dedication. “It has been a long road, but we have gotten here.”

An estimated 25,000 Jamaicans live in Passaic County, most of them in Paterson, according to organizers. Paterson’s Jamaican population is believed to be the largest of any municipality in New Jersey, so the renaming of Vreeland Avenue did not go by unnoticed.

The Jamaican ambassador to the United States, Audrey P. Marks, sent an emissary to offer her congratulations. “This is testimony of your perseverance, and good standing in the Paterson community,” Marks said.

The consul general for the Jamaican consulate in New York, Alsion Roach Wilson, struck the theme for the day. “Stronger together,” she said, drawing cheers from the crowd. “Through our combined efforts, we will emerge from this pandemic stronger together. We are hard-working people, striving to make the world a better place.”

The event also attracted most members of the city council, as well as former Third Ward councilman Bill McKoy, who is Jamaican. McKoy’s nemesis, Alex Mendez was also on hand.

“Although I have an American passport, I will always consider myself Jamaican,” McKoy said. He then ticked off the accomplishments of great Jamaicans: Marcus Garvey, the civil rights leader who advocated the “back to Africa” movement; Bob Marley, the musical voice of liberation; and the Jamaican men and women who recently won medals at the Olympics.

Reggae music filled the air, as did the aroma of jerk chicken as hundreds of people gathered in Amistad Park, recently renamed to recall the 1839 slave revolt aboard a Spanish ship. A dancer, Andre Downer, offered a moving interpretation of Bob Marley’s “Redemption Song,” and a local restaurant owner, Sheila Blythe, was honored for her contribution to the community.

Jamaican immigrants began arriving in Paterson in the 1960s, and have reshaped the city, opening restaurants and beauty parlors, working in construction and as housekeepers and healthcare aides. Younger Jamaicans have their elders to thank.

“My mother came here, she wanted a better life,” said Keith Watson, who says he came to America 40 years ago. “Coming to America, it’s easy to get a job. The education system is better.”

Now 56, Watson says he organized the first Jamaica Day festival in Paterson, around 2011. His daughter earned a master’s degree and is a detective with the Passaic County Sheriff’s Department.

“We’ve got Jamaicans in law enforcement. We’ve got doctors and lawyers. The Jamaican population is growing, in a positive way,” Watson said.

Errol Kerr left his home in Jamaica and came to Paterson in 1980. “When I got here, there was a kind of white flight leaving the city. Jamaicans bought properties and created community.”

Kerr got involved and served on the Paterson school board from 2006 to 2016. He said the Jamaican influx has energized the local economy, and is a good example of why immigration works.

“Paterson has always been a launching pad for immigrants,” Kerr said. “I think American greatness lies in the fact that it is open to every culture in the world.” 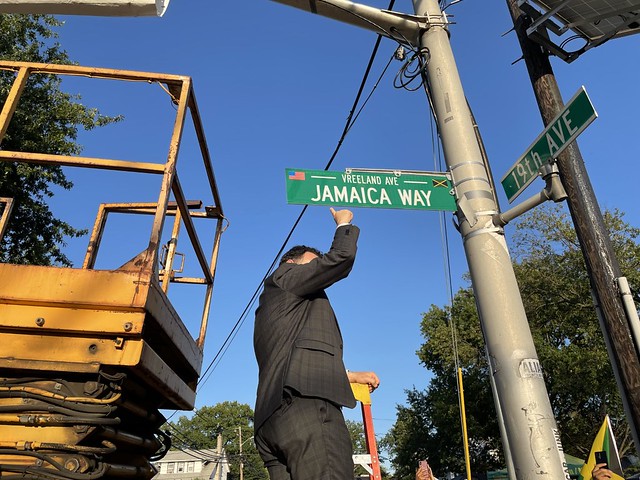