‘Paterson will rise from the ashes,’ Sayegh says in final state of the city speech for current term | Paterson Times 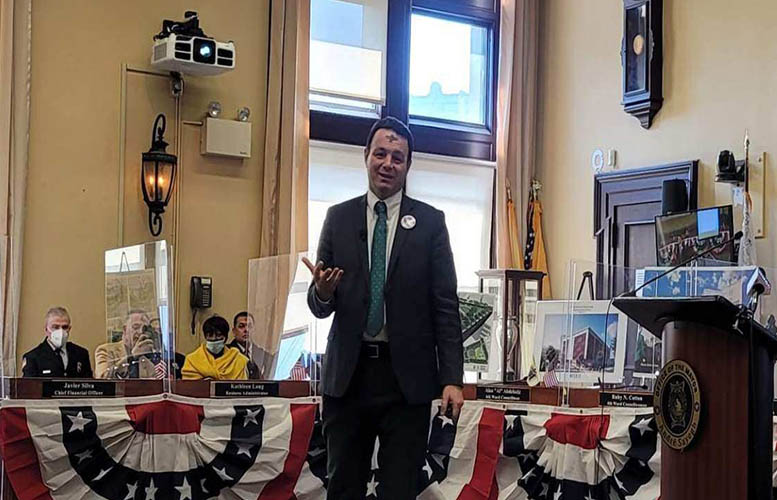 Sayegh’s 45-minute speech touted his accomplishments over the past year. He mentioned the city’s financial empowerment center, guaranteed income initiative, and high single-shot vaccination rate. He also touted the renovation of the Hinchliffe Stadium that has been underway since the summer.

“We are bringing Hinchliffe Stadium back,” said Sayegh. But he also acknowledged his administration’s struggle with crime.

Paterson logged the highest murder rates in 2020 and 2021 in the past three decades.

“We did what we could to combat this epidemic within a pandemic,” said Sayegh, citing recovery of 419 guns. He pointed out police have been understaffed, citing the layoff of 125 police officers a decade ago. “We’re still reeling, but we’re going to recover.”

Sayegh aims to boost the number of officers to 439.

Velez, who sat through the entire speech, was unimpressed. He said Sayegh repeated the same information that he has shared in his numerous press conferences.

“I saw people sleeping,” said Velez. He said mostly public employees attended the speech. He described Sayegh’s speech as a “clown show” with baseball jokes and Abbott and Costello skit.

State of the city address is a formal speech that the mayor is required to deliver every year. Sayegh has turned it into an informal speech with talking points on slides.

Velez said Sayegh had four years to rebuild the ranks of police, but failed to do it.

“The city looks like a garbage field,” said Velez. He is challenging Sayegh for the mayor’s seat in May.

Mimms said she came to the speech late and declined to comment.

“I didn’t watch it. I don’t think I missed much,” said councilman Flavio Rivera. He said services for residents has not improved.

Sayegh spent some time talking about his success with vaccinating residents against Covid-19. He did not mention that he drastically reduced the city’s vaccination program last month.

“Paterson will rise from the ashes of the pandemic,” said Sayegh towards the end of the speech, which was delivered on Ash Wednesday.