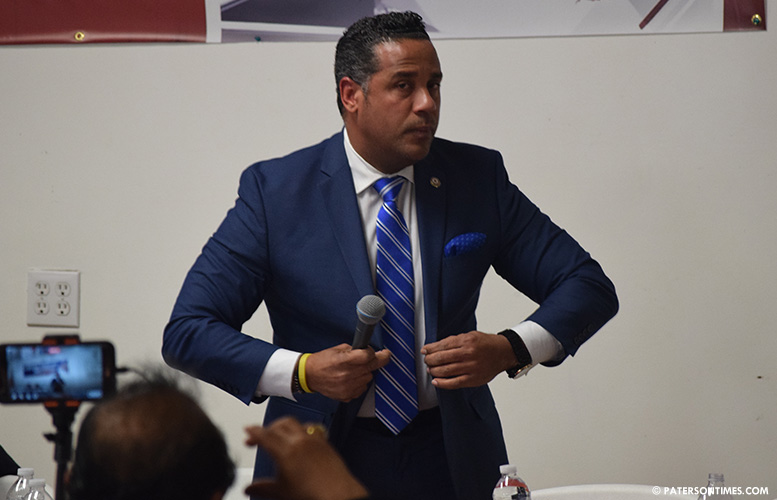 Vincent Iannaccone, who is represented by the law firm Genova Burns, is objecting to 150 of Mendez’s nominating petitions. Genova Burns sent a letter to the City Clerk on Friday stating, “Mendez’s petitions must be rejected because he has failed to obtain the signatures of 867 qualified voters” to be a candidate in the mayoral race.

If he falls below 867 signatures, Mendez could be disqualified from running for mayor.

“I’m not concerned because all my petitions are good,” said Mendez. “You know that’s Andre behind that. He is running scared. He knows he’s not going to be able to stop me with the court and his lies.”

Mendez said Sayegh “can’t run on his record.” Sayegh is “using all his dark money” to target him to monetarily bleed him, he said.

Sayegh refused to say if he was behind the effort to disqualify Mendez by challenging the latter’s petitions. Instead, Sayegh attacked Mendez for his pending criminal charges related to the 2020 election.

“He is not fit for public office,” said Sayegh. “How can anyone believe anything Alex Mendez says? He has zero credibility.”

Sayegh’s fingerprints are all over the petition challenge. Iannaccone, who lives on Knickerbocker Avenue, is a longtime Sayegh supporter, according to current and former allies of the mayor. Iannaccone was an active member of the 6th Ward Neighborhood Association when Sayegh was running the neighborhood watch group.

Iannaccone could not be reached via phone or at his listed domicile on Knickerbocker Avenue on Sunday.

Genova Burns is among the most expensive election law firms in New Jersey. They represented Sayegh four years ago, sending threatening letters to his opponents’ campaigns. The law firm also got a contract from the city after Sayegh became mayor.

“He does not have the balls to go up front and put his name. You want to challenge me? Why don’t you do it. He uses another person,” said Mendez. “Do you think this person [Iannaccone] is going to be able to hire Genova Burns? They charge $700 an hour.”

“In addition, there are a significant number of petitions where the voter’s signature does not, upon information and belief, match that which is in SVRS [Statewide Voter Registration System] and therefore must be rejected,” reads the letter.

“We already counted 867. They are all registered voters. You don’t need to bring in anymore,” Mendez recalled being told by the City Clerk.

Mendez said he was “upset” when he saw the objection letter on Friday.

Mendez is among five people running for mayor. Other candidates said they were upset that someone had requested all their supporters’ signed petitions.

“They got everybody’s petitions,” said former three term councilman Aslon Goow, who is running for mayor. “This is really, really bad. They’re going to target those people later.”

“If they are invalid, what are they checking them against? How do they get the signatures?” asked Goow.

Voters’ signatures are not public information.

Goow said he isn’t worried about his petitions. He said he made sure every petition of his was valid. He said the City Clerk also verified them.

Several mayoral candidates said Sayegh is engaging in these moves because he is desperate after struggling to run the city for four years.

Goow said Sayegh just mentioned the stadium and a senior housing complex, pointing out neither of them has been completed under the incumbent’s watch.

“We need to have a transparent and honest race,” said councilman Luis Velez, who is running for mayor. “This is another gray cloud after all the bad reporting we had about incidents of voter fraud.”

“I think Andre is frightened. He’s fearful that he’s not in a good space with this election. He’s doing the best he can to cheat and steal the seat,” said councilman Michael Jackson, who is running for mayor. “People are frustrated with Andre. Doesn’t matter what he does. They don’t want him back in there.”