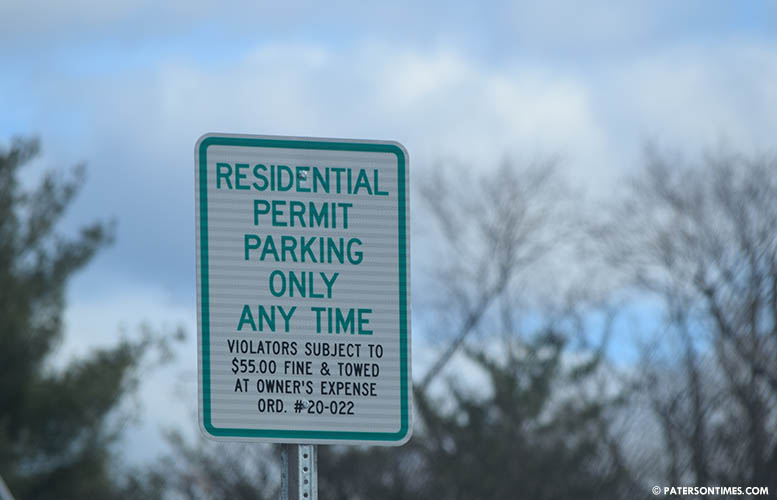 Two years after the City Council approved the measure, mayor Andre Sayegh’s administration earlier in the month haphazardly implemented residential permit parking for a small portion of the 1st Ward.

“They put them up last week. It’s election time. I wouldn’t be bragging about it,” said longtime resident Donald Lynch, who lives on Paterson Street, on March 19.

Lynch said residents were not told how to obtain stickers – without stickers residents risk getting their vehicles towed. He approached a person that was installing the signs and asked where to pick up the stickers. He was told the City Clerk’s Office. But the clerk’s office did not have stickers.

“They instructed them to put the signs up because of the article,” said councilman Michael Jackson, who represents the 1st Ward. He is referring to a Paterson Times story published in late January. “They had no implementation plan. There are no stickers. There’s no plan on how it will run, which office it’s going to be run out of. It’s total chaos and total confusion.”

Jackson said he held a meeting at Triangle Village on Paterson Street last Wednesday. “They were all concerned their cars would be towed,” said Jackson.

Jackson said business administrator Kathleen Long told him she did not know the signs were put up. He said Long suggested taking the signs down, but Jackson said he told her it will just create more confusion.

“Leave them there and we will work it out,” said Jackson.

Councilman Luis Velez, chairman of the public works committee, said the city is not issuing permits to residents at this time.

“We’re going to amend the ordinance so that residents can pick up the permits at the traffic division at North Barclay Street,” said Velez. “They are not going to get ticketed. It’s not going to be enforced yet. Signs are up, but enforcement has not started.”

Sayegh had two years to implement the ordinance, but dropped the ball. It’s not a new program. Under his predecessor, the city rolled out a residential permit program on two streets in the Eastside section.

“The mayor has no freaking clue. No one in his administration has any clue,” said Jackson.

“I have to blame him. He is the orchestra conductor. He doesn’t care how it sounds – just play,” said Velez speaking of Sayegh.

Sayegh did not respond to a message for comment.

Sayegh is running for re-election on May 10. Velez and Jackson are challenging him for the mayor’s seat.