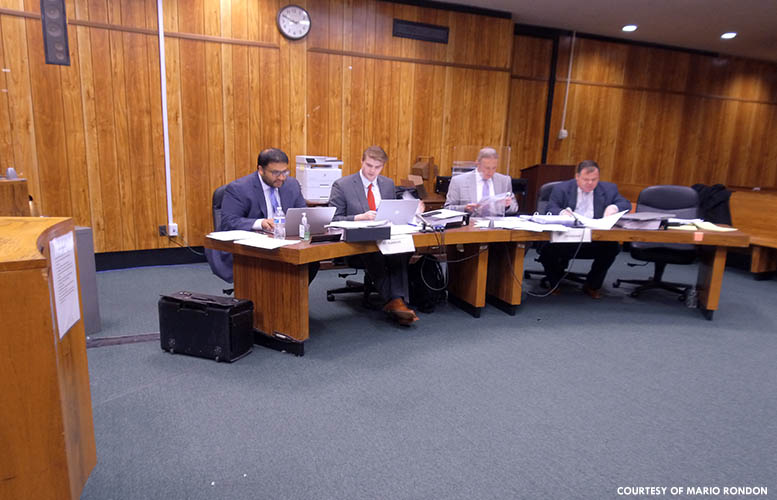 New Jersey Superior Court judge Thomas Brogan on Thursday appeared skeptical of the argument that a voter who signed petitions for multiple candidates should have all their petitions voided.

That’s the key argument made by Raj Parikh, attorney for incumbent mayor Andre Sayegh’s supporter Vincent Iannaccone who is challenging councilman Alex Mendez’s petition to disqualify him from challenging Sayegh. He initially challenged more than 150 petition, bulk of them of voters that signed petitions for multiple mayoral candidates. Nearly 100 of the petitions initially challenged were cases in which a voter signed for multiple candidates.

Parikh needs the judge to agree with him to bring Mendez below the 867 petitions requirement to run for mayor.

“Both would be deemed invalid,” said Parikh, who represented Sayegh’s campaign four years ago, “if a person signed petitions for multiple candidates.” He backed up his argument by citing two cases.

But Brogan appeared skeptical of Parikh’s argument. The judge cited one case, where signatures were not stricken for both candidates.

Brogan described Parikh’s position to disqualify all petitions by a voter that signed for multiple candidates as “nuclear.”

“There’s nothing on the statute that says you must strike,” said Mendez’s attorney Matthew Moench.

“Signature does wound up meaning something for one petition,” said Brogan. He pointed out City Clerk Sonia Gordon counted one petition by a voter that signed for multiple candidates and disqualified subsequent petitions.

Parikh suggested the clerk’s process is wrong and is not backed by law. “There is no law at all and they have not cited any because it does not exist,” he said.

“That’s why I guess she’s granted a lot of discretion,” answered the judge. “We usually don’t have to disturb it if we find it reasonable.”

Parikh claimed no one else in the state uses the process the city clerk in Paterson uses.

The City Clerk has used the same process for more than two decades to certify candidates.

“The clerk in her process has been very consistent across time,” said Christopher Harriott, attorney for the City Clerk. “These candidates have run before; they know what the rules are.”

Petitions received first are counted first even the candidates packet states as much, said Harriott.

“First to file system is a reasonable exercise of the clerk’s discretion,” said Harriott. “That method has not previously been challenged.”

Mendez’s attorney complained about Parikh’s move to dramatically increase the number of petitions being challenged from 158 to 360.

Parikh claimed he couldn’t have initially objected to the 360 because the clerk’s office failed to provide him requested documents.

“We have complete resistance from the City Clerk,” said Parikh.

“That’s not correct,” retorted Harriott. He said the clerk has provided documents to Parikh.

“Every time he talks he adds more numbers,” joked Edward Florio, another attorney representing the City Clerk, speaking of Parikh.

Brogan said he is unlikely to allow the larger challenge of 360 petitions. He worried this case could turn into a “major fact finding” mission that will delay the election.

The judge gave all sides time to figure out a way to resolve the case. Towards the end of the days proceeding, the lawyers were reviewing voter petitions one by one.

“There’s got to be a burden of proof that’s met. I find that it’s not being met,” said the judge.

Brogan said he would like to have Gordon, the city clerk, before the court on Friday morning.

“I want some discussion as to her procedure,” said the judge.