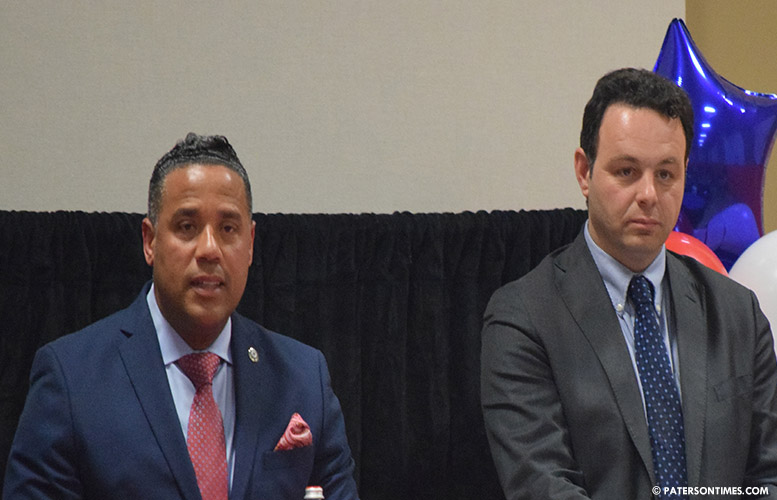 Sayegh has $380,655 in his campaign account. Councilman Alex Mendez has just $19,543, according to 29-day pre-election reports filed by both men.

Councilman Luis Velez had even less with just $9,225.

“I can’t compete with him on money because he has been selling the city to his friends and special interest. He’s the most corrupted mayor we’ve had in the city’s history,” said Mendez, who was knocking on doors and campaigning on Tuesday. “I’m not selling myself to special interest. I want to represent the residents of Paterson.”

Mendez said Sayegh can have all the money in the world, but he does not have the support of the people.

“Paterson residents are clear. They can’t wait to take him out of office,” said Mendez speaking of Sayegh.

Mendez said he has two more fundraisers planned to support his campaign.

“Looks like he is citing a fraudulent account on his campaign paraphernalia. I sense another investigation into his wrongdoing,” said Sayegh.

Paid for by signs must match the information that appears on a campaign’s certificate of organization and depository, according to the New Jersey Election Law Enforcement Commission (ELEC) regulations.

“There was really not much activity,” said Goow. He said has his first fundraiser is this Thursday.

Goow said he intends to file his report this week.

Jackson has often called Sayegh and his team at City Hall incompetent because of what he sees as their numerous failures over the past four years.

“Campaigning isn’t always about money,” added Velez. “He can have all the money he wants, but the people are unsatisfied with his administration.”

Jackson said he will file his report in the next “few days.”

“Even with all that money, he knows he’s losing this election,” said Mendez.