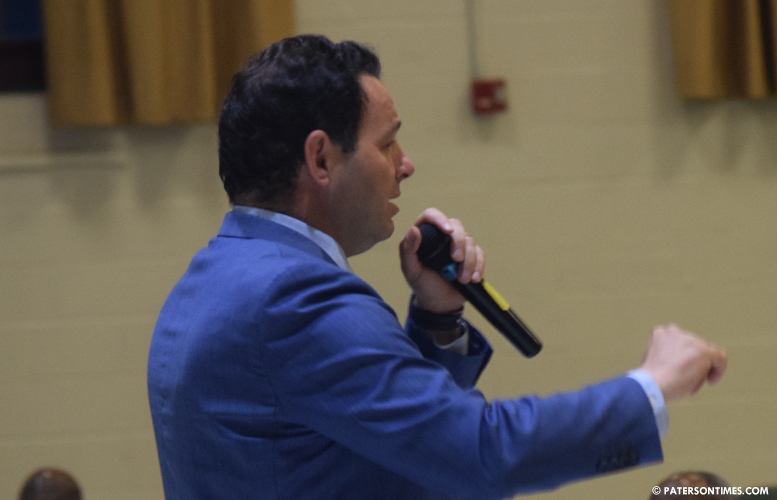 Mayor Andre Sayegh has been using the Paterson emergency mass notification system to promote himself, according to more than a hundred robocall recordings reviewed by the Paterson Times.

Sayegh promoted groundbreakings, ribbon cuttings, and police hirings. He also boasted about Paterson’s vaccination rate, which now lags behind Jersey City, as being the best in New Jersey, in multiple calls.

Some found Sayegh’s use of the emergency notification system to promote himself as abusing the system.

“I was the one that raised it. He has been misusing it. Everybody knows that,” said councilman Luis Velez. “You’re using an emergency system for politics that’s intended to be used for critical situations.”

Velez publicly asked for data and recordings of the robocalls. He has yet to receive them from Sayegh’s business administrator Kathleen Long.

Sayegh does not think he abused or misused the emergency mass notification system.

“Throughout this pandemic I have made it a point to keep our residents informed about everything from where they can get vaccinated to how they can receive free financial counseling. Countless constituents have thanked me for my consistent communication and raising their spirits through my messages during this crisis,” said Sayegh.

Sayegh made numerous robocalls to promote vaccination. He also made some calls to alert residents about snowstorms and cancellation of recycling pick up.

But he failed to use the system when it mattered the most: first few months of the pandemic, Velez pointed out. Velez recalled telling Sayegh’s team during an emergency health meeting to use the system in 2020 to disseminate information about Covid-19 testing.

Sayegh made no robocalls from March, when the pandemic struck the city, to October 2020. He made a robocall on November 6, 2020, promoting his “City Sweep Initiative” to tackle quality of life issues such as panhandling and dirty streets. That initiative appears to have failed as Paterson continues to suffer from rampant panhandling and unclean streets.

Velez said residents needed information about Covid-19 testing during those crucial early months. “People needed to get tested,” said Velez. However, Sayegh’s team at City Hall failed to set up a testing site for residents during the early months of the pandemic despite the recommendation of the city’s health officer.

“He is using that line, which is for emergency only, to campaign,” said councilman Alex Mendez. “He’s using city resources to campaign. People have gone jail for that. That should be investigated.”

Mendez called Sayegh’s use of the line to promote himself “unacceptable.” Former councilman Aslon Goow said he was shocked that Sayegh would abuse the mass notification system in that manner.

“Are you serious?” remarked Goow. “I can’t believe it. Wow.”

Goow and Mendez said some people have complained about the constant robocalls from Sayegh. In some months Sayegh made as many as 10 robocalls to residents.

“People are tired of all the robocalls he’s been making. A lot of voters told me, ‘Listen, I get a robocall every week. I get multiple robocalls from this guy,’” said Mendez.

Sayegh’s overuse of the emergency notification system to promote himself and provide non-emergency miscellaneous information to residents is likely reducing the effectiveness of the system.

“When we have a real emergency, we’re not going to be able to use that channel to reach out to the people,” said Mendez.

Sayegh, who is seeking a second term for mayor, has benefited from getting his message out to voters using the city’s system, according to his rivals.

Mendez, Velez, Goow, and Michael Jackson are running to unseat Sayegh on May 10.

Paterson’s mass notification system, which is powered by Everbridge, can reach nearly 30,000 people, according to city records.

“I think he got more for his personal use than so-called emergencies,” said Mendez. “He’s calling voters every week.”