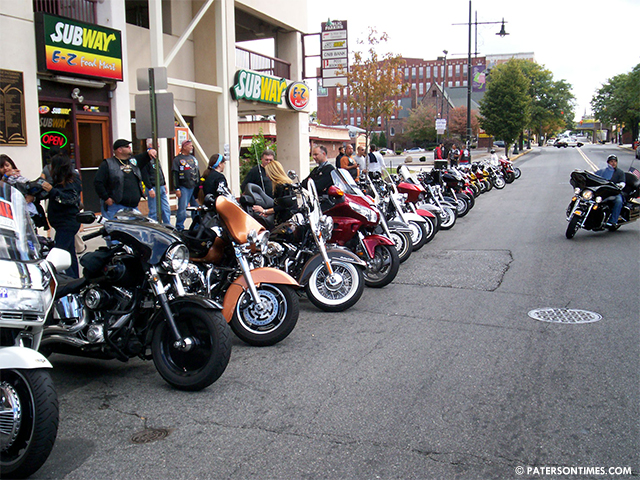 A 60 miles motorcycle riding event was held Sunday morning by the city’s police union to raise funds to build a memorial for fallen police officers killed in the line of duty.

“We’re attempting to make a memorial here to honor all our fallen officers,” said Alex Cruz, president of Policemen’s Benevolent Association Local 1. “What we’re trying to do is gather up all the funds.”

Standing in front of the Frank X. Graves Public Safety Complex, Cruz pointed to the front-center of the building where the memorial will be erected. “It’s going to be right in the center of the public safety complex,” said Cruz.

Much of the money to build the memorial has already been collected, and only about 20-percent remains.  “We’re almost at 80-percent,” said Cruz, whose union has been working to place the memorial since 2005.

In 2011, he started the biking event, which allowed anyone with a motorcycle and a license to participate in the lengthy run which stretched to the far edges of Passaic County to West Milford and back. Each rider had to pay $25 to participate, and each passenger on the bike is another $10. “Let’s say a couple comes in, that’s $35,” said Cruz. There was also merchandise: t-shirts and pins.

About 110 riders – excluding the number of police bikes — participated, among them were motorcycle clubs from the city and elsewhere. Hispanic Cycle, Cacique Riders, Team Die Hard, and Ironpit Bulls, were some of the clubs that participated in the run. “We always come out as a family,” said Ruben Sorrentini, a rider with Team Die Hard, who came all the way from the Bronx. “When they have events we always come down here.”

September 29th, 1896, was the date when the Policemen’s Benevolent Association was founded in Paterson. “Today is the 117th anniversary of the PBA, and it was started in Paterson,” said Van Kluyve, a retired lieutenant. “That’s why we’re number one.”

Riders zoomed through the city to the edges of the county and rode back to Westside Park for a lunch meal provided by the union. This is the second time the union held the event; last year there were 100 riders; this year it jumped by 10.

During the same time next year the memorial, which will depict a solider kneeling in front of an octagon like shape with names of all the fallen police officers going back to the 1800s, will be already be completed. Research is being done to uncover the names of the fallen officers. “We’re researching back to the 1800s,” said Cruz. By the middle of next year, said Cruz, the memorial should be erected. “It will be done by next year,” said Cruz.