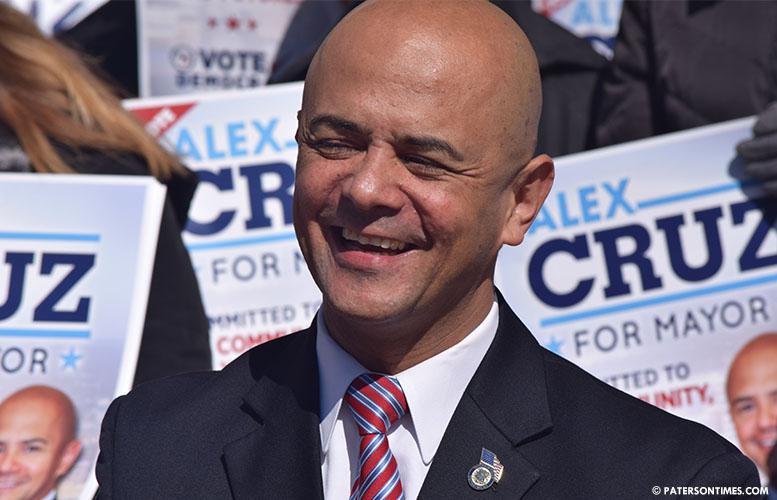 Mayoral candidate Alex Cruz, who has been fighting to prove he has lived in Paterson for a year to qualify for a mayoral run, will remain on the ballot for May. His eligibility was formally challenged by city resident Yanet Santana.

Cruz submitted a sworn statement with 10 pieces of evidence – 2 lease agreements and 8 utility bills – to prove he resides in Paterson.

The utility bills fail to prove one-year residency in Paterson. For him to prove a year of residency in the city Cruz needs documents that go back to May 2017.

His lease agreements are questionable. For example, the first lease for the Pennsylvania Avenue apartment starts on Nov. 1, 2016. Cruz voted in Little Falls on Nov. 8, 2016. In a speech in front of the City Hall on Thursday Cruz stated he moved to Paterson in Nov. 2016.

Cruz said his family was “disrupted” by his move suggesting his wife still remains in Little Falls with his children. He is not separated from his wife.

“The city clerk did not see sufficient grounds to exclude Mr. Cruz from the ballot,” wrote the city’s chief attorney Domenick Stampone in a letter on Thursday to Cruz and Santana’s attorneys.

Stampone has said in the past the residency issue involving Cruz is better dealt with in the New Jersey Superior Court.

There is a growing body of evidence that suggests Cruz does not reside in Paterson. Among them:

Chief investigator: “Cruz must be disqualified by the City Clerk”

The chief investigator for the Hudson County superintendent of elections office also determined Cruz does not reside in Paterson, according to a to letter to the clerk’s office obtained by the Paterson Times.

Charles Blue, the chief investigator, conducted his investigation on Mar. 10 and 11 to determine Cruz does not live at 57 Madison Street.

Blue relies on U.S. Postal Service and New Jersey Motor Vehicle Commission records to make his determination. He also visited the address in the past weekend.

Cruz “did not establish local residence” to meet the one-year requirement set by state law to qualify for run in Paterson, wrote Blue.

“It is therefore my opinion that Mr. Cruz must be disqualified by the City Clerk of Paterson. The onus thus becomes the candidate [sic] to prove residency,” wrote Blue in a letter sent on Mar. 12, 2018.

Hudson County deputy superintendent of elections Brzozowski could not immediately be reached for comment for this report on Friday morning. A message was left at his office.

“This is a systematic corruption and points to an even deeper level of corruption within City Hall which goes beyond Alex Cruz. It points to cronyism and a total disregard of the law and of the word of their own investigator,” said Santana. “The superintendent of elections set a non-biased investigation in motion which clearly and undeniably states that he does not meet the statute. What right does anyone have to go against it? I will be pursuing legal action to prevent election tampering and to make sure the laws are complied with. Someone has to do it, and I’m amazed that no one else has. If not me, who? If not now, when?”

Santana is alluding to the recent conviction of mayor Jose “Joey” Torres and three public works supervisors on corruption charges.

Santana on Thursday said she has yet to file in court. However, she vowed to do so.