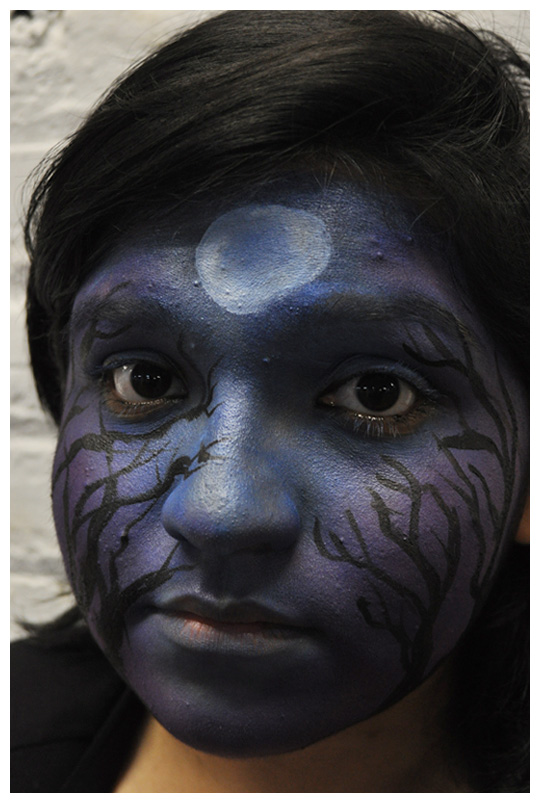 An artist from Paterson was one of the six individuals, and the only American, to win a German art award on Monday.

RoByn Thompson, an artist from Van Houten Street, was the only American to win the Szpilman Award, a German art prize that was established a decade ago. The award recognizes and rewards ephemeral art that is temporary yet effective.

Thompson won the award for painting people’s dreams on their faces. Her work, pictured, called “Clear As The Dream On My Face,” does much to showcase the dream and nightmare of an individual on his face.

Consider the painting above, it is of person, who found herself in the forest at night, and passed away there in the cold. “Last night I had a dream that I was lost in the forest,” read a description of the dream. “I died in the cold.”

Thompson said she often contemplated the reactions of others to a one’s dreams. “I wondered what it would be like if we could see each other’s dreams. Would people react to us differently? Would we be shy about our dreams or proud of them?” said Thompson. “My project is my low tech work around for this that I’ve taken to local schools, festivals and events including, most recently, The World Maker Faire.”

Her work has been demonstrated in a number of festivals. The award recognize the extraordinary art Thompson is making. Out of 454 participants, which included artists from various countries, she was one of the six to receive an award. She was also the only woman to do so.

Thompson describes the process she had used numerous times at festivals. She said, “Using water based face paints, I paint their face using images from their written dream. Because it’s typically at a festival, I have about 5 minutes to complete a painting. After they get painted, anyone interacting with them can see images from their dream right on their face.”

She said, it has to be an actual dream, and not an aspiration (a dream to become something). “It’s important to specify that it needs to be a sleep dream, otherwise they tend to write down an aspiration or daydream like winning a lottery or marrying Justin Bieber!” said Thompson.