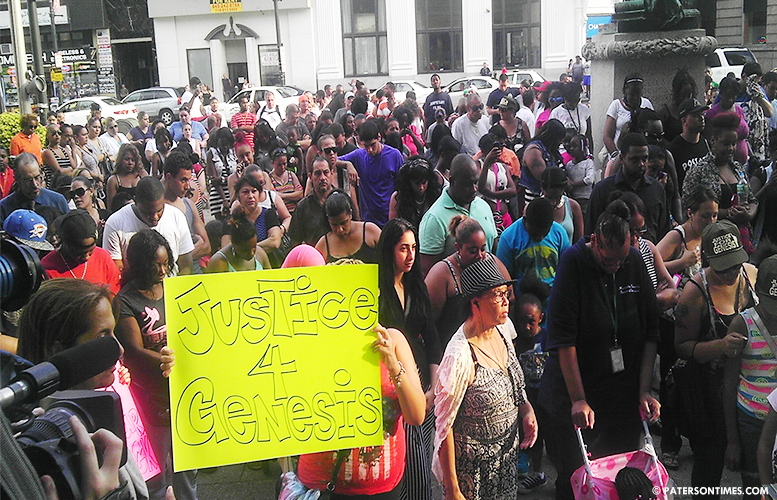 The distraught family members of the slain Genesis Rincon stood on the steps of the city hall building imploring anyone with information to help bring the perpetrator to justice. “Shooter do the right thing turn yourself in,” read a sign held by one of the roughly 900 people who attended the rally.

“Whoever did this has no heart for anything,” said Alexis Rincon, sister of the slain. The visibly devastated father of Rincon whose name is also Alexis said, “My daughter is looking down on us right now.”

A number of long time city residents said they have not seen anything as abhorrent as the murder this girl. “I don’t know what to say,” said Allan Boyer, pastor at Bethel AME Church located three blocks from Rosa Parks Boulevard, where Rincon was shot in the head on Saturday evening. “Words can’t explain it.”

James Salmon, former president of the Ceasefire community group, said, “It wasn’t quite this bad.”

Salmon who has been living in the city for more than 50 years said, “This is the worst I’ve seen.”

The father overwhelmed by grief spoke for less than two minutes as hundreds yelled: “Justice for Genesis!”

During the rally that began at 6 p.m. and lasted until 8:30 p.m. family members and friends handed out flyers asking anyone with information to call the police tip line and bring the shooter to justice.

The city’s police is offering $2,000 for information leading to an arrest. A reward amount Mohammed Akhtaruzzaman, 2nd Ward councilman and public safety committee chairman, thought was too little. “This $3,000 reward is not enough,” said Akhtaruzzaman to the crowd.

Tavarez told council members to give $200 and also raise $800 from their supporters. Mayor Jose “Joey” Torres, pledged $1,000, then he doubled it by pledging another $1,000. Ernest Rucker, a community activist, who has been active in the movement seeking justice for the slain girl, pulled out hundred dollar bills from his wallet and pledged to pitch in $200.

“We’re sorry for failing to do our part,” said Torres to the family. ”That death will not go in vain as long as I have breath in my body.”

Torres said seven detectives are working around the clock to solve the case. Law enforcement officials have asked anyone with information to make a confidential call to (973) 321-TIPS. Corey Teague, school board member, who helped organize the rally, said the police have their hands tied if the community isn’t cooperative. “I think they’d be able to do more if the community cooperated,” said Teague when asked whether police are doing enough to find the killer.

Torres said he will take steps to deploy mobile precincts to hotspot locations like Rosa Parks Boulevard. The mayor said he wants to revisit the business curfew ordinance for crime ridden neighborhoods. And Torres urged council members to “immediately craft a resolution to regulate hours of operation for liquor stores.”

Della Fischer, a city pastor, speaking in front of the large crowd, said after the family decided to donate the slain girl’s organs, five lives were saved. Genesis, named after the first book of the bible, gave five children a new beginning, said Fischer.