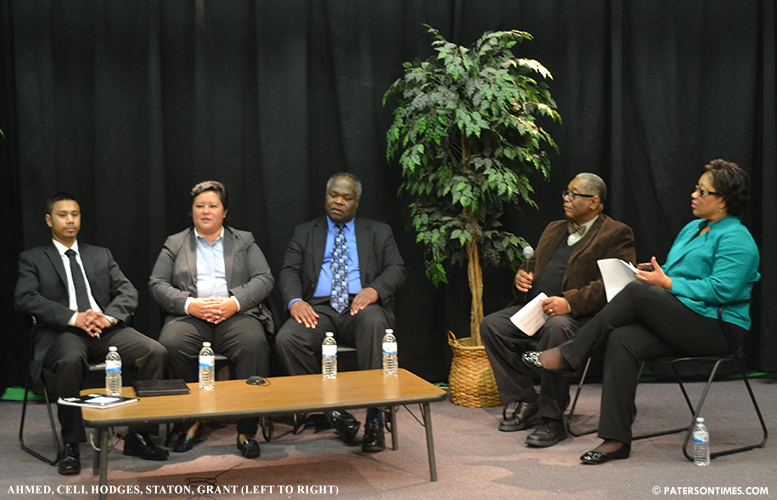 Seven out of the nine candidates running for the November 4th, 2014 school board election gathered inside the studio of John F. Kennedy High School on Monday evening to discuss their ideas on bettering the city’s public school system.

“We need something in place that will enforce and encourage our teachers to do their job,” said Lilisa Mimms, answering the first question on merit pay and its likely impact on city students. “I think it’s needed, but we’re going to have to really watch it.”

The new teachers’ contract agreed to by the school district and Paterson Education Association, the teachers’ union, includes merit based pay increases.

“Our children will become greater when our teachers are held accountable for the instruction they are providing to the children,” said Chrystal Cleaves, incumbent. Cleaves suggested the merit based pay system will reward and keep high caliber teachers in the district while weeding out ineffective ones.

“I believe in the merit system as well,” added Emanuel Capers, founder of the 4th and Inches Foundation which promote athleticism to city youth. “I think it will be a great incentive for them to help our children.”

Jonathan Hodges, incumbent, speaking in the second segment – the forum was divided with half of the candidates questioned at one segment and the rest during another – pointed out that merit pay may result in school principals engaging in the sport of favoritism.

“Principals will support people that they are very fond of and a good teacher who may not be in the good graces of the principal will not be rewarded for their work,” said Hodges. “If there’s a fair system in place and the teachers are in fact evaluated on what they could do in the classroom and how they perform then the merit based system can cause better teacher to be rewarded for their activities and encourage other teachers to be better.”

Hodges said he is hoping for a decent evaluation system, but he has yet to see such a system.

“Some teachers will benefit from it, others won’t,” said Nelly Celi. “There has to be things in place to assure that everybody, every teacher is being graded accurately, and not favored or hurt because they don’t get along with the administration.”

Koyes Ahmed, a software testing engineer with an accounting degree from Ramapo College, echoed the call for fairness in evaluating teachers.

“We constantly hear our schools need more parent participation. Too often parents report the schools are not welcoming to them. How should our schools engage parents?” asked James Staton, president of the 1st Ward Community Development Corporation, who was the interviewer in the forum organized by the Paterson Education Fund, an education advocacy.

“Sometimes parents are intimidated to come to school because when they come in they don’t see a friendly face,” added Cleaves. She suggested a bring the parent to school day, when students will be allowed to bring their parents to school.

“There’s 30,000 students in Paterson but when you go to a board meeting only 20 to 25 parents are there,” observed Ahmed. The newcomer suggested the district better communicate dates and times of important meetings to get parents involved. He suggested the school display electronic message boards outside schools announcing board meetings.

“The problem is convincing parents to share their busy day with the school system and to push education in their homes,” said Hodges. The incumbent said 70-percent of a school-age child’s time is spent outside of the classroom. Hodges said involving parents in the education of their children is an issue every urban district is facing.

Hodges mentioned a number of initiatives — parent liaisons, parent school council in every school — the district has undertaken, but has produced little result. “It hasn’t been very effective,” said Hodges. The board member expressed some hope in the new parent university initiative that seeks to educate parents in the importance of being involved in a child’s education.

Capers suggested using every form of communication: social media, flyers, phone calls, to engage parents and get them engaged.

“That’s one of the things Dr. Evans is working on with his Bright Future [Plan],” said Khader “Ken” Abuassab, public relations officer with the Arab American Civic Organization and alternate member of the city’s historic preservation commission. “Now they have in each school existing parental committees.”

Abuassab said despite the committees and the efforts to get parents involved they are simply not coming out. Abuassab prescribed parents to inquire about their child’s school day upon return from school. “Ask they if they need help with any subject if they are short on the grade,” said Abuassab.

What should the district do with reduced state funding, asked Staton. The pastor, citing figures from the Education Law Center, a public education advocacy, said the district will receive $24 million less than what it is entitled to under the School Funding Reform Act (SFRA).

“What we have to do as a board is we have to be good stewards over the money we have right now,” said Cleaves. She suggested cutting superfluous programs.

“We have to put the fund where it needs to be,” said Capers. “Put it in the right place make sure all our budget is being used for the right programs.

Celi said the district is top heavy suggesting the district ought to cut back on giving salary increases to those at the very top.

Mimms said the district should reduce the number of initiatives it funds that have worked elsewhere in the county and focus on incubating its own ideas at tackling district problems. Mimms stated that native solutions will not cost as much as outside solutions.

Ahmed suggested the community and the board should pressure the superintendent and state officials to better fund the district.

“This has been a difficult challenge for the school district,” said Hodges. The board, in the past, demanded the superintendent to sue the state to demand the fund it is entitled to under the SFRA school funding formula. Hodges said the district has won the suit, but governor Chris Christie ignores the ruling.

“We the community sit back very quietly and accept these cuts without coming out and saying ‘this is wrong,’” said Hodges. He said in the absence community pressure, Donnie Evans, state-appointed district superintendent, has little cover to demand the funds it is entitled to by law.

“The budget Chris Christie is giving us is enough to run our schools,” said Abuassab, differing from other candidates.

All seven candidates – Taj Uddin reported in sick, Flavio Rivera was absent — were asked whether they intend to devote the necessary time to be an effective board member despite receiving zero compensation.

“I will attend every board meeting we have on schedule,” said Capers.

“I will organize my time to make sure I’m there for all the board meetings,” said Abuassab.

“I will definitely be at all the meetings and all the workshops,” said Mimms.

“I’m going to make the time,” said Celi. “I will attend every meeting humanly possible.”

The two incumbent had mixed answers on attendance and devoting time to school board matters.

“My record speaks for itself,” said Cleaves. She has perfect attendance on all workshop meetings and has missed only one regular meeting, according to data compiled by the fund.

“I’m guilty,” said Hodges, when asked about attendance. He said for the past year he has been spending a great deal of time on a task force with the New Jersey School Board Association to close the achievement gap in the state. “As a result of that I’ve missed more meetings over the last year than the previous 12 [years],” said Hodges. He has missed one workshop, three special, and one regular meeting.

“I work for the federal government. I work from home,” said Ahmed. “I’m definitely committed. I have flexible time.”

In attendance during the forum were about two dozen residents, who had opportunities to write in their questions for the candidates. Rosie Grant, executive director of the fund, who served as the moderator, read the questions to the candidates.

During the first segment which included Capers, Mimms, Abuassab, and Capers, an audience member wanted to know whether any of them were using the board as a stepping stone for higher office. All four responded in the negative. In that same segment, another question surfaced on college readiness.

The four candidates all concurred the district is doing a poor job preparing students for college. Evans last week, commenting on the 19 students, said the district has been teaching to make sure students pass state exams, so a city student may be able to obtain a high school diploma.

In the second segment which included Hodges, Ahmed, and Celi, the moderator read out two questions from audience members. The first were three pressing issues faced by the district.

Ahmed mentioned security as a major concern with the district having reduced its security budget by $450,000.

Hodges focused on poor facilities in the district.

Celi mentioned literacy. She said too many city students are not reading at grade level, a vital skill that hinders students from obtaining information through reading.

The three candidates in the second segment provided solutions to resolving their respective problems.

The forum, which ran for 1 hour and 40 minutes, allowed the candidates, who are vying for the three seats up-for-grabs, to showcase their ideas. Among the three seats is one that’s not being defended by an incumbent. Wendy Guzman has decided to retire from politics.

Rivera is seeking to assume the rest of Alex Mendez’s term. Mendez jumped boat in May after winning a council at-large seat.

Organizers of the forum said the forum will be broadcasted on the city’s public access channel.

Correction: The original article stated Celi was a manager at the Girl Scouts of North Jersey; however, she has said she is no longer with that organization.

Correction: The initial story erroneously stated Staton was a former school board member. Staton never served on the city’s board of education.