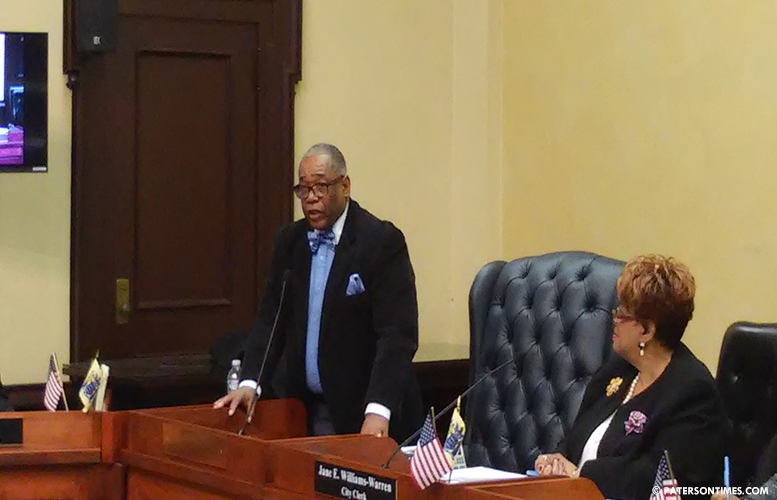 The city’s governing body on Tuesday evening appointed James Staton, president of the 1st Ward Community Development Corporation, to represent the city’s 1st Ward until a special election can be held in November 2015.

Staton is filling the vacancy left behind by former 1st Ward councilman Anthony Davis. “As we come together, we come together to better our city, particularly, the 1st Ward,” said Staton. A pastor at the Church of God and Saints of Christ, Staton brought council members together to unanimously cast their votes in favor of appointing him.

When hurricane Irene swept through the city inundating the northern part of the 1st Ward, leaving behind flood damaged homes, Staton came before the council several times to seek assistance, said Andre Sayegh, 6th Ward councilman. “He was a permanent fixture speaking to the issues of flood damaged properties,” said Sayegh.

“This has been a difficult vote and I also think it was easy,” said William McKoy, 3rd Ward councilman. McKoy said he felt comfortable voting for any one of the three nominees.

Out of the four nominees, who submitted letters for consideration, three appeared before the council: Waheedah Muhammad, former school board member; Nakima Redmon, a commissioner on the city’s board of Historic Preservation; and Staton. Michael Jackson, owner of bankrupt Jacksonville Restaurant, was not present.

McKoy said since Staton was the first to ask for the post he ought to receive it. “You were the first one to come to the council,” said Mendez, speaking directly to Staton. “We opened up this process because you came with that letter.”

Before Staton successfully leveraged his first-movers advantage, council members interviewed the three candidates, directing a flurry of questions to the nominees.

What are the three main problems facing the 1st Ward? asked Alex Mendez, councilman at-large, to the three. The nominees responded crime, poor education, jobs, and litter infested streets. With all three nominees present at the same table, there was little room for varying answers.

What will you do to retain the existing businesses in the 1st Ward? asked Kenneth Morris, councilman at-large. All three candidates mentioned tax cuts, leading to a follow-up question from Morris.

What is a PILOT (payment in lieu of taxes)? asked Morris. Redmon, who is involved in city politics, mostly behind the scenes serving on obscure boards, quickly defined the accurate definition. “They don’t pay taxes for a period of time,” said Redmon. She said it was letting a business receive a negotiated property tax rate as opposed to the rate everyone else is forced to pay.

Sayegh wanted the nominees to clarify that none of them wished to run for the upcoming special election. Staton, who promised in his initial letter to forgo seeking the seat in the special election, reaffirmed stating he had no intention of running. Muhammad and Redmon promised likewise. Sayegh also obtained a promise from Muhammad and Redmon that neither will seek the seat, despite not being appointed, come November of next year.

Morris also asked how would the nominees have voted for the city’s introduced budget. All three responded they would have voted in favor.

Before the council began to interview the nominees, city residents spoke for and against making an appointment. “While I believe the 1st Ward needs representation and this body is within its power to appoint someone to that post, without an election the decision to do so usurps the democratic process,” said Stewart Stimson, city resident.

Stimson said the at-large council members can take care of the ward. He did not see any need to move ahead with an appointment. Stimson said 1st Ward resident should vote in their council person.

About seven resident spoke before the council, a majority of them calling for an appointment. “We really need representation in the 1st Ward,” said Patricia McNeil, city resident. “Please consider appointing someone tonight.”

“To have the 1st Ward seat vacant for 11 months, it would have just been too long for me and it wouldn’t have been fair for residents there,” said Ruby Cotton, 4th Ward councilwoman. “We needed to do this.”

Sayegh said the pastor by virtue of being heavily involved in the community through his church, his work with the Ceasefire community group, is familiar with the problems facing the 1st Ward and the city.

“He comes in not needing to be briefed on anything because he’s essentially been doing a lot of the work without the title,” said Sayegh.