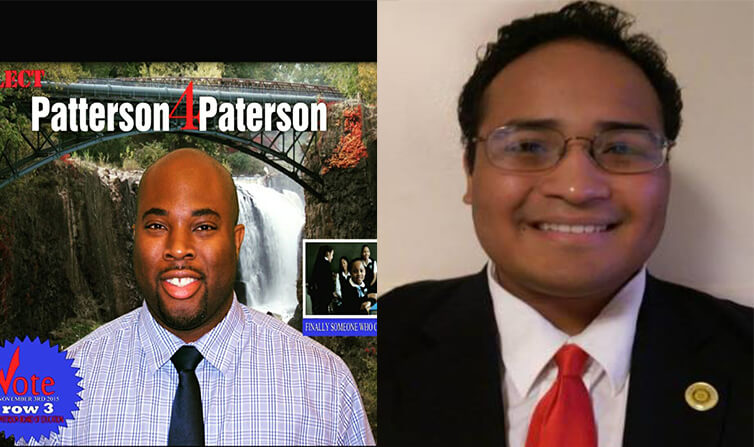 School board candidate Jason Patterson, one of seven vying for three obtainable board of education seats in November, has dropped out of the race and endorsed Jesus Castro.

“I like what he’s about,” said Patterson, a youth football coach for the Nifty Lions, about Castro. Patterson (pictured, left) said he was taken with Castro’s stance against closing down elementary school libraries. He said Castro shares the same vision and goals that center on involving parents in student education to improve academic outcome.

“I think he saw in me an ordinary father, someone who has a passion to help our children, not just for political points,” said Castro (pictured, right). “What happens in the school system affects my children. What I want for my kids, I want for all kids of Paterson.”

Castro, who described himself as a human services professional, said he was “elated” at Patterson’s endorsement. “Folks in the community see me as someone they can trust,” he said.

Patterson said he dropped out of the race for “professional” and family reasons without elaborating.

Patterson’s backing is a quality endorsement and isn’t political, said Castro. He noted Patterson’s involvement with city young people since 2005. Patterson said he has been coaching and mentoring city youngsters for a decade or more.

The two men have never had any real interaction until this week when Patterson called Castro for a discussion. Castro said Patterson has been a Facebook friend for the past “couple of month”. He said they have had interactions online, but none offline.

Patterson endorsement of Castro appears to be squarely based on the latter’s message. The two men did not know each other just two months ago.

Castro said he has been advocating for children since 2003, when he was appointed to governor Jim McGreevey’s blue-ribbon panel to monitor the progress of reforms at the Division of Youth and Family Services (DYFS) to better child safety.

Castro said he continued his advocacy with the founding of the Hispanic Council which officially came into being in 2010. He said on the board of education his focus will be on three things: responsible spending, improving literacy, and adult education.

“Sometimes the parents are not equipped to help their children,” said Castro. He said adult education will equip those parents with the skills to play an enhanced role in their student’s education.

With Patterson out of the race the field has shrunk to six candidates.  Incumbents Corey Teague and Errol Kerr. And challengers Castro, Nakima Redmon, Oshin Castillo, and Kevin Michael Henry.

Incumbent Manny Martinez is not running to defend his school board seat. He is seeking the 1st Ward city council seat on November 3rd, 2015.

“He doesn’t flip-flop as far as his message,” said Patterson about Castro. “It’s been consistent.”